Liu congratulated Wilson on becoming the new and 13th British Ambassador to China, voicing hope that she will play an active role in promoting China-Britain relations. 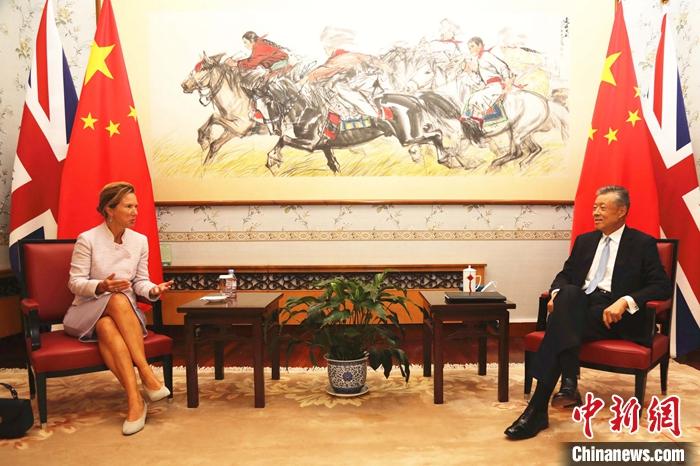 Liu said that 70 years ago, Britain became the first major Western country to recognize the People's Republic of China.

Over the past 70 years, China-Britain relations have made remarkable progress despite ups and downs, and the cooperation between the two countries in various fields has achieved positive results, Liu said.

Such cooperation has great potential and broad prospects in the post-Brexit and post-pandemic era, he said, noting that currently, China-Britain relationship is at a critical juncture.

As long as the two countries observe the basic principles governing international relations, especially mutual respect for sovereignty and territorial integrity, non-interference in each other's internal affairs, equality, and mutual benefit, the current difficulties could be overcome and China-Britain relationship will be back on the right track to a steady and healthy development, which would benefit the peoples of both countries, said the Chinese ambassador.

Expressing her eagerness to take office in China, Wilson said that China is a major country with important international influence, and a Global Britain needs to develop a constructive relationship with China.

Wilson also expressed her willingness to have extensive communication with people from all walks of life in China, step up mutual understanding, and strive to promote the continuous development of Britain-China relations.

The two sides also exchanged views on other issues of common interest.