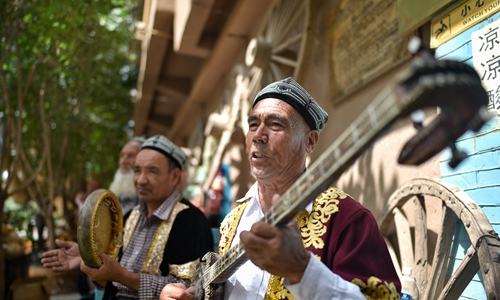 The Chinese Ambassador to Australia called the reports of detention of 1 million Uyghur people "utterly fake news" at a press conference on Thursday in Canberra, Australia.

Cheng Jingye, the Ambassador said that the Xinjiang-related matters are internal affairs of China when asked about Australian foreign minister Marise Payne's criticism of the "mass detention" of Muslim Uyghurs.

Cheng said that reports that 1 million Uyghur people are in detention were "utterly fake news" and defended the "vocational education and training centers" in Xinjiang for eliminating radicalism, providing vocational skills, legal knowledge, Putonghua and other training.

The trainees at the centers are flowing "with some coming in and some going out," Cheng said, noting that all the trainees who used to be influenced by extremism have finished the studying there by now. The measures in Xinjiang are no different from what other countries do to fight terrorism, Cheng said.

Cheng also played the Chinese state broadcaster CGTN documentary Fighting Terrorism in Xinjiang to allow the audience to know the challenges and achievements the Chinese government made in its anti-terrorism efforts in the region.

Cheng said the attacks and violence in the region had killed a large number of innocent people and damaged property, which were the reasons why the Chinese government cracked down on terrorism and violence.

The efforts effectively curbed the terrorism in the region and there have been no single case of violent terrorist attacks in the past three years, Cheng noted.

Cheng said that Chinese-Australian writer Yang Hengjun was detained in China on suspicion of espionage and his legal rights were protected, denying the allegations that Yang was handcuffed or questioned every day.

Western media reported earlier this year that the Australian government has received notification from the Chinese side that Yang was detained in China.

A few days before that, Western media reported Yang's "missing" in China.

Cheng noted bilateral relations have experienced ups and downs this year. Both countries benefited from cooperation, but have divergences on certain issues, he said.

"It is important for both sides to look at each other's development as an opportunity rather than a threat in creating mutual trust."