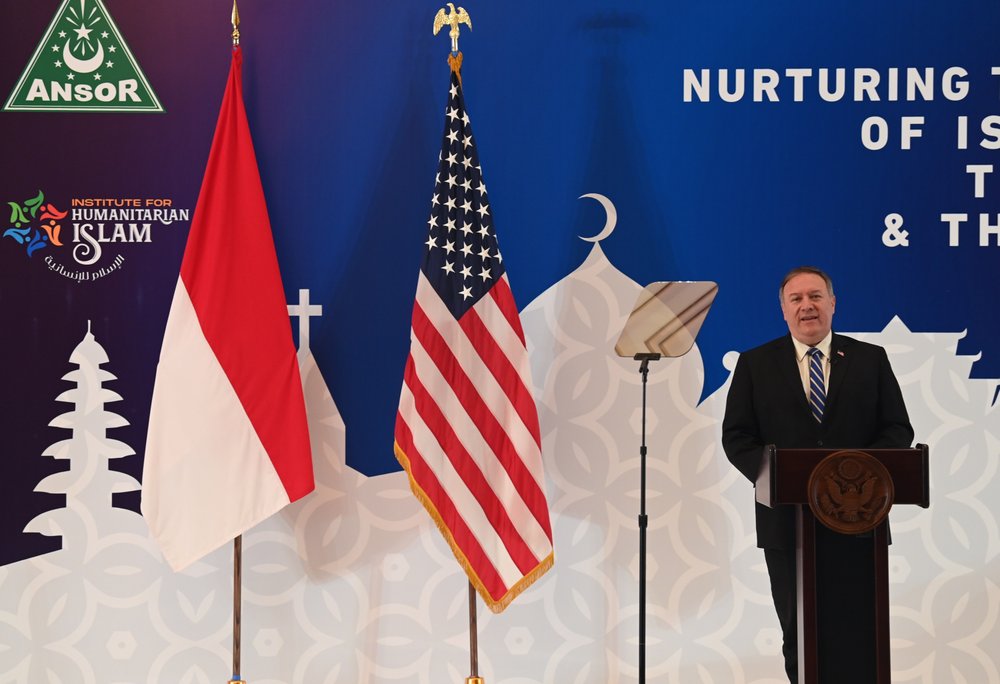 During his visit to Indonesia,the US Secretary of State Mike Pompeo deliberately smeared China and tried to pit China against Indonesia, which undermines regional peace and stability. The Chinese side firmly opposes such efforts. Pompeo’s remarks and moves further lay bare the United States’ vile attempt and highlights some of its own serious problems.

The United States is an instigator of a new Cold War. The CPC was chosen by history and people to lead the nation onto a development path that suits China’s national conditions. China has all along sought friendly ties with other countries based on the Five Principles of Peaceful Coexistence. China neither exports its ideology nor interferes in other country’s internal affairs. By contrast, the US is going all out to revive a new Cold War, stoking up ideological confrontation, inciting color revolutions here and there, and grossly interfering in other country’s internal affairs even at the cost of war, which leads to nothing but disasters in the world.

The US is the super-spreader of “political virus”. In response to Covid-19 outbreak, China has put its people and their lives front and center, acted in an open, transparent and responsible manner, taken science-based measures and actively engaged in global cooperation, all in an effort to build a global community of health for all. By contrast, the US politicians chose to put selfish political gains first, downplayed the risk of the virus and refused to follow science. The virus, as a result, has spread out of control and brought sufferings on innocent citizens. The US further spread political virus and tried to shift the blame, even groundlessly attacked and withdrew from the World Health Organization, which has severely undermined global efforts to contain the outbreak.

The United States is an obstructionist in global openness and cooperation. With the goal of bringing benefits to all, the Belt and Road Initiative follows an approach of extensive consultation, joint development and shared benefits and advocates openness and inclusiveness. Over 100 countries and international organizations have supported the initiative. Projects such as Jakarta-Bandung high-speed railway are delivering tangible benefits to countries along the routes including Indonesia. By contrast, the US administration believes in “America First”, pursues trade protectionism and economic bullying, distorts global industrial chain, oppresses other countries through unilateral trade measures and jeopardizes multilateral trading system and global economic order. Its actions are holding back other countries’ development as well as global openness and cooperation.

The United States is the world’s biggest hacker. China has launched the Global Initiative on Data Security and firmly upholds cyber security. Chinese companies such as Huawei and ZTE have made undeniable contribution to global communication technology infrastructure. By contrast, the US has overstretched the concept of national security and abused state power to unjustifiably suppress Chinese companies, to maintain its hegemony and monopoly in science and technology. The US intelligence has long been running indiscriminate, illegal surveillance programs on foreign governments, businesses and individuals including those of its allies, which poses a formidable challenge to other country’s national security. The US is playing a ludicrous trick of feigning innocence and calling others thief.

The US is a trouble-maker in the Islamic world. The Constitution of PRC protects citizens’ right to freedom of religious belief and the lawful rights and interests of ethnic groups. The human rights of all ethnic groups in Xinjiang are fully protected. As a true friend to the Islamic world, China has rendered its firm support to the just cause of the Palestinian people. By contrast, the US administration has issued the “Muslim ban”, overlooked legitimate interests of Palestine, instigated color revolutions in the Islamic world, waged proxy warfare and invaded other nations with trumped-up charges. It has brought instability, turmoil, division, poverty and prolonged sufferings to the Islamic world.

The United States is becoming the most dangerous factor jeopardizing peace in the South China Sea(SCS). The South China Sea is the shared home for countries in the region. China and other regional countries are committed to safeguarding peace and stability and promoting cooperation and development in the SCS and to properly handling relevant issues through friendly consultation and dialogue. By contrast, the US has not ratified the UNCLOS but always posed as a defender of it. It has repeatedly pitted regional countries against one another, flexed its muscles and instigated tensions. It is becoming the biggest factor fueling militarization and the most dangerous factor jeopardizing peace in SCS.

The US is a destroyer of regional cooperation. The US “Indo-Pacific strategy” is to hype up military undertones and confrontation, trumpet old-fashioned Cold War mentality and build a so-called new NATO in “Indo-Pacific” dominated by itself. This strategy contravenes the spirit of mutual benefit of East Asia cooperation, undermines ASEAN’s centrality in regional affairs and dampens the momentum and prospect of East Asia cooperation. Such dangerous attempt to turn back the wheel of history poses grave threat to the regional peace and stability.

The wheels of history roll on; the tides of the times are vast and mighty. As peace and development remain irreversible trends of the world, it is time for the few US politicians to abandon their hostile policy against China, refrain from sabotaging or meddling in China’s friendly ties and cooperation with regional countries, stop undermining regional peace and stability and end trampling on international fairness and justice. Otherwise, they will meet total failure at last.