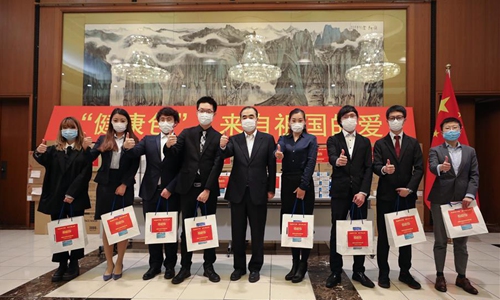 Chinese Ambassador to Japan Kong Xuanyou (C) poses for a group photo with representatives of Chinese students during a ceremony held to distribute health kits at the Chinese Embassy in Japan in Tokyo, Japan, April 17, 2020. (File photo: Xinhua)

Chinese Ambassador to Japan Kong Xuanyou on Friday accepted an exclusive interview with Asahi Shimbun to tackle China-Japan and China-US relations, and picked up quries on the Diaoyu Islands, Hong Kong and Xinjiang Uygur Autonomous Region.

The Chinese Embassy in Japan published the report on its official website on Sunday.

The COVID-19 pandemic has disrupted some established bilateral exchange arrangements between China and Japan this year, and many diplomatic events had to be postponed, said Kong, adding that the most important of these is President Xi Jinping's state visit to Japan.

Considering the significance of the visit, both China and Japan believe that it's necessary to ensure the visit will take place at a "most appropriate time, environment and atmosphere" to make it a complete success, said the ambassador.

China is willing to maintain dialogue and communication at all levels with Japan to make full preparations for high-level exchanges, Kong said.

Moreover, China is generally open to the issue of signing the fifth political document, he added.

The Asahi Shimbun reporter said that judging from the Japanese perspective, China has shown a positive attitude to improve Japan-China relations, but at the same time China has frequently dispatched ships to the waters off the Diaoyu Islands, which seems to be contradictory.

In response, Kong said China's position on the Diaoyu Islands issue is consistent and clear, and Japan is also very clear about this. The two sides should face up to the reality of their different positions and handle the issue properly from the long-term perspective of bilateral relations.

He pointed out that the top priority is to manage the crisis and prevent unexpected incidents, adding that the issue needs to be resolved in a manner acceptable to both sides, which cannot be achieved overnight.

In 2014, China and Japan reached a four-point consensus, clarifying the important principles for handling the Diaoyu Islands issue, Kong said, urging both sides to follow it.

Based on China's sovereign position on the Diaoyu Islands, it has the right to take the corresponding protection measures, Kong said.

Speaking of the Hong Kong issue, Kong said there are two premises: The first is that the Hong Kong Special Administrative Region is part of China and Hong Kong affairs are China's internal affairs. The second is that national security affairs are the responsibility of the central government, which is a common practice of all countries in the world, and China is no exception.

Kong noted that the National Security Law for Hong Kong targets the very few anti-China rioters who are trying to split the country and publicly challenge the bottom line of "one country, two systems." Kong said that the legal rights and freedoms of the majority of law-abiding Hong Kong residents and foreigners will be better protected under the law.

The law also applies to crimes committed by non-HKSAR permanent residents outside the region, which is a common international practice and not one that has been pioneered by China.

Kong said he believes that the Japanese people will view the Hong Kong issue more accurately over time as the situation gradually improves.

With regard to the Xinjiang issue, Kong said Xinjiang has established education and training centers in recent years in accordance with the law, which has drawn public attention.

However, some media distorted the facts, smeared and thrown accusations at China over the Xinjiang issue.  Kong called on the public to understand the truth before drawing any conclusion.

China has taken measures in order to curb the spread of religious extremism and prevent violent terrorist cases, he said.

The relevant personnel have taken language, law, vocational and de-radicalization courses at the training centers, and their personal freedom and legal rights were protected, Kong said.

All students at the teaching and training center have now completed their studies and returned to society. Many people have gotten rid of the influence of violent extremist groups and reintegrated into society, Kong noted.

Kong added that thousands of foreign envoys, officials from international organizations and media professionals have visited Xinjiang. They all agreed that Xinjiang has made important contributions to the international community's fight against terrorism and de-radicalization and has accumulated valuable experience.

He said China has agreed to and will arrange for European Union (EU) diplomats in China to visit the region.

China always welcomes friends from other countries, including European countries, to have a look at Xinjiang, and to get to know the real situation on the ground, instead of relying on hearsay or deliberately fabricated lies.

Kong pointed out that the essence of Xinjiang issues is not so-called human rights, ethnic, or religious issues, but issues of anti-violence, terrorism and anti-separatism.

Kong reiterated that the so-called Hong Kong and Xinjiang issues are nothing but political tools created by a few countries such as the US to suppress China.

When asked about the biggest obstacle to China-Japan relations, Kong said the lack of mutual trust is the current shortcoming in bilateral relations, especially in the security field.

Kong called on both sides to jointly think about how to implement the important consensus reached by the leaders of the two countries and break through the bottleneck that restricts the development of the bilateral relations.

Kong noted that it is undeniable that distrust still exists between the two sides in the security field, and this does not meet the objective needs of building China-Japan relations in line with the requirements of the new era. He called on both sides to work hard to break through this bottleneck.

Kong noted that both China-US relations and the regional situation have become more complicated. He emphasized that no matter what difficulties and challenges it faces, China will firmly defend its sovereignty, security, and development interests.

China firmly opposes the "new Cold War" between China and the US. He said that the current mutually complementary situation in economic development has not changed, and mutually beneficial cooperation and common development can be achieved.

"The South China Sea is not an international political arena," Kong said, noting that maintaining peace and stability in the waters is the common aspiration of countries in the region, and resolving disputes through dialogue is the right way.

Kong also said that the Taiwan question is related to China's sovereignty and territorial integrity, involves China's core interests, and is also a principle in the political basis of China-US relations.

Kong urged the US to abide by its commitments made in the three Sino-US Joint Communiqués and do things more conducive to bilateral relations and regional peace and stability.

As for the discussions on "attacking enemy bases" in Japan, Kong said China is closely following the discussions, emphasizing that China opposes any suggestion that China is an "imaginary enemy" in order to promote anti-missile policy adjustments.

Kong said China hopes Japan will fully consider regional security and stability and the concerns and perceptions of neighboring countries, and handle the issues properly.

China has always opposed US deployment of intermediate missiles in the Asia-Pacific region, as it will not only seriously threaten China's and regional security, but also disrupt the regional strategic balance.