CHINA Chinese ambassador to US: Beijing does not seek global dominance

Chinese ambassador to US: Beijing does not seek global dominance

"China develops itself to deliver a better life to its people, not to scramble for global dominance," Chinese Ambassador to the United States Cui Tiankai said in New York on Tuesday, adding that China's development, while benefiting itself, has also served other countries well, including the United States. 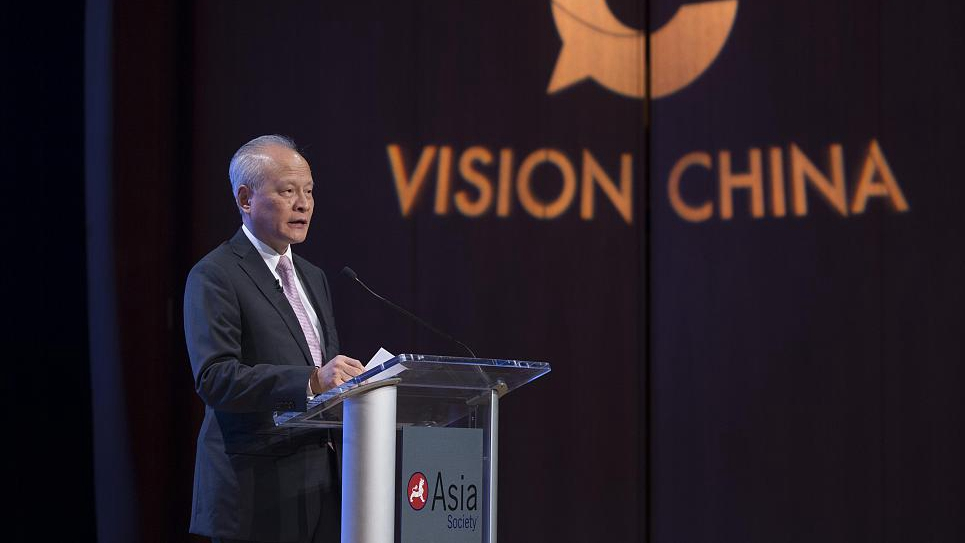 Chinese Ambassador to the United States Cui Tiankai delivers a keynote speech at Vision China, an event hosted by China Daily and Bank of China at the Asia Society, in New York, U.S., September 17, 2019. (Photo: VCG)

The United States and China should expand cooperation given how crucial the relationship is to both sides and global stability and prosperity, Cui said in a keynote speech at Vision China, an event hosted by China Daily and Bank of China at the Asia Society.

Whether the United States can take an open and confident approach to China's development will affect its future and determine the direction of China-U.S. relations and very probably the future of the world, he told the audience of some 250 people.

Noting that tremendous achievements over the 40 years of diplomatic relations between the two countries have brought huge benefits to the 1.7 billion Chinese and American people, and greatly advanced peace, stability and development across the globe, Cui said the relationship is now at a crossroads that harbors some "perplexities."

The senior Chinese diplomat said that China-U.S. relations should evolve for the best, especially when "the trade war is still taking its toll" and "there are still noises in America, clamoring for a new Cold War or for a partial and even complete decoupling of the two countries."

Cui noted that America's perception of China is the crux of the problem.

"In spite of the great changes China has undergone over the past 70 years and especially over the past 40 years of reform and opening-up, the country's original aspiration to pursue happiness for its people, rejuvenation for the nation and harmony for the world remains constant," he said.

The seasoned diplomat cautioned that "it is extremely dangerous and irresponsible to base policy on alarmism and label China as a strategic rival and even an adversary."

"Cooperation is the correct choice" for both countries and talks must be carried out on an equal basis, Cui said.

Differences and disagreements do not justify confrontation or conflict; instead, they should be seen as opportunities and potential for complementarity and cooperation, he noted.

"I sincerely hope that standing on the crossroads of China-U.S. relations, we will make the right choice and leave a proud mark in the annals of history," he said.