Chinese ambassador to US cautions 'destructive forces' in bilateral relations 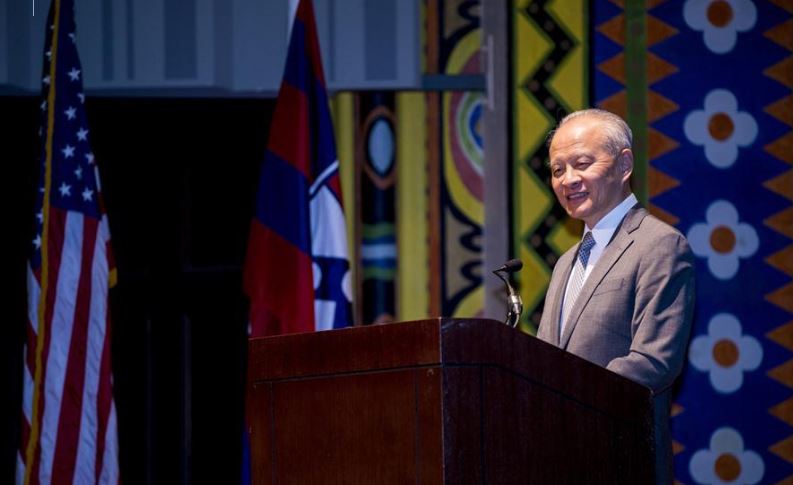 Chinese Ambassador to the US Cui Tiankai addresses the 2018 Penn Wharton China Summit in Philadelphia, the US, April 15, 2018.   (Xinhua)

WASHINGTON (Xinhua) -- Noting that China-US relations are at a "critical crossroads," Chinese Ambassador to the United States Cui Tiankai has said that "we must be alert that some destructive forces are taking advantage of the ongoing trade frictions."

"Extreme rhetoric, such as decoupling, a new 'Cold War,' and clash of civilizations, are having their way here," Cui said Wednesday night at a gala dinner held by the U.S.-China Business Council, which represents more than 200 U.S. companies that do business with China.

"If suspicion, animosity, estrangement and confrontation are allowed to grow without any constraint, what consequences will the two peoples and the whole world have to suffer?" he said.

The ambassador said China looks forward to working with the United States to develop a relationship "based on coordination, cooperation and stability" and "achieve its sound and sustained growth."

While the two countries have been "overshadowed" by trade frictions over the past year, the two sides are working hard to address their differences, Cui noted.

"We believe that as long as we engage in dialogue and consultation on the basis of equality, mutual benefit and mutual respect, we will be able to tide over the difficulties and return to the right track of win-win cooperation," he said.

There is no "Thucydides' trap" in the world, and the real trap will only come from misunderstanding, misjudgment and obstinate prejudice, he noted.

The Chinese ambassador said China and the United States are key stakeholders for world peace, stability and prosperity, and each of us is a stakeholder for the development of China-U.S. relations.

"It is the social responsibility of both Chinese and American companies to stand up against anyone who tries to stir up confrontation and hatred," said Cui.

"It is our shared social responsibility to thwart the attempt to undermine our relations, and create positive impetus to our friendship and cooperation," he added.