CHINA Chinese ambassador to US reaffirms faith in 'one country, two systems'

Chinese ambassador to US reaffirms faith in 'one country, two systems'

China's unswerving faith and resolution to uphold the "one country, two systems" and safeguard national sovereignty will stay as firm as a rock whatever difficulties and challenges lie ahead, Chinese Ambassador to the U.S. Cui Tiankai said on Friday. 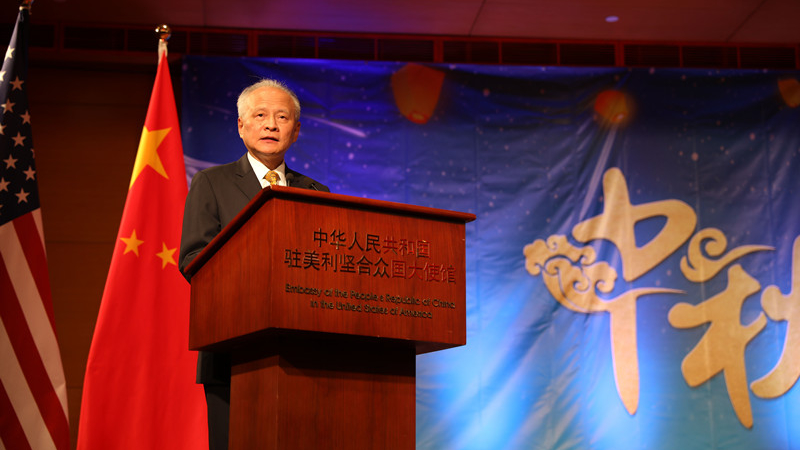 Chinese Ambassador to the U.S. Cui Tiankai speaks at a reception for the Mid-Autumn Festival in Washington D.C., U.S., September 7, 2019. (Photo via Chinese government website)

"Hong Kong is part of China, and ‘one country' serves as the precondition and basis of the exercise of ‘two systems.' Without it, there will be no ‘two systems' to speak of," the ambassador noted.

He made the remarks in a speech delivered at a reception for the Mid-Autumn Festival in Washington, D.C.

Cui said Hong Kong is facing the most severe situation since its return to China 22 years ago, condemning the radicals who attempt to make a mess of Hong Kong, challenge the bottom line of the "one country, two systems," trample on the dignity of the country and nation, and even go so far as to split the country.

"Their behaviors have evoked serious concern and strong opposition of Chinese compatriots across the world. We will never let their scheme prevail," he said.

"As we sing in a popular song, Hong Kong 'has been standing in the wind for five thousand years'; how is it possible for her to stumble over such a setback? As an integral part of China, Hong Kong, dubbed as the Pearl of the Orient, shares its weal and woe with all of us and will only shine when it is with us."