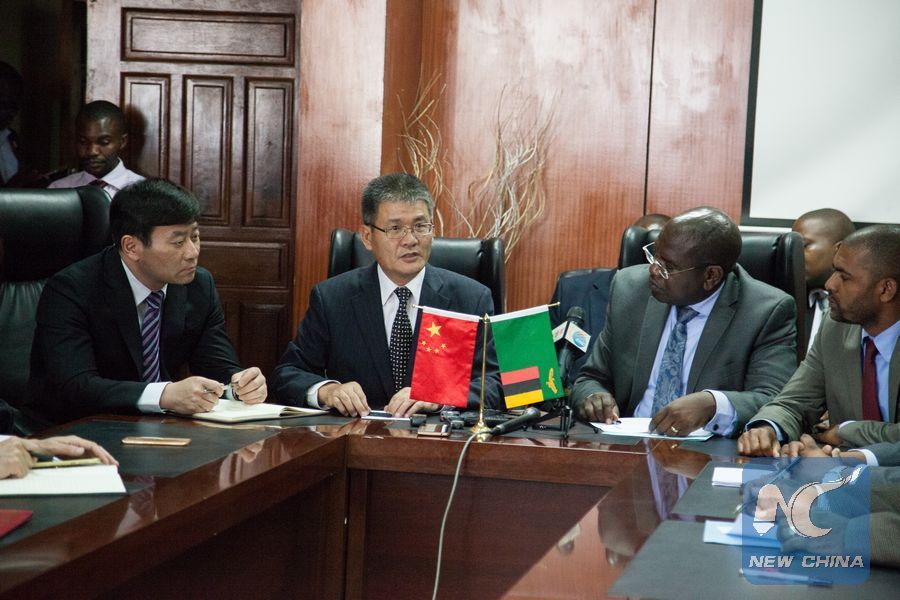 Chinese Ambassador to Zambia Yang Youming (2nd L, Front) speaks during a donation ceremony at the Ministry of Health in Lusaka, capital of Zambia, on Jan. 24, 2018. (Photo: Xinhua)

The Chinese envoy, who leaves the southern African nation after over three years of service, said the joint efforts of the two countries during the period have resulted in bilateral relations progressing significantly and borne new fruits consistently in various sectors.

"China and Zambia are both in a great and fast changing time. The world is changing. China and Zambia are changing. What does not change is our desire for national development and the commitment to realize a better life for our two peoples," he said during a farewell ceremony at the embassy.

According to him, the relationship between the two countries has constantly developed on the basis of mutual respect, equality and mutual benefit, witnessed by high-level visits of government officials.

He added that economic and trade cooperation has increasingly become the highlight of the China-Zambia relations in the new era, resulting in the two countries having formed a wide-ranging, multi-level, and in-depth developing cooperation landscape in areas such as infrastructure, mining, agriculture, manufacturing, and medical industry.

China-Zambia cooperation has provided strong support to Zambia's industrialization and economic diversification, and created a large number of jobs for the benefit of the local people, he added.

He further said China-aided projects have soared over the years and were visible in many sectors, with the bilateral trade volume soaring to a record 3.8 billion US dollars in 2017.

Vincent Mwale, Zambia's Minister of Local Government, praised the outgoing envoy over his tireless efforts to promote the relation between the two countries and that the Zambia-China relations have benefited tremendously from his commitment.

The Zambian minister said the two countries have now embarked on a second generation of infrastructure projects following the holding of the Forum on China-Africa Cooperation (FOCAC) Summit in South Africa in 2015.

According to him, the two countries have been working on new projects after FOCAC such as the extension of a the Levy Mwanawasa Hospital in Lusaka, the construction of a modern international airport as well as various road projects, a continuation of the spirit of first generation of projects such the construction of the Tanzania-Zambia Railway Authority (TAZARA) rail line.

He further said the two countries established a twinning program to facilitate the exchange of ideas among provinces of the two countries, a situation which will go a long way in assisting Zambia's industrialization program.

Zambia, he said, will be forever grateful to China for the invaluable service and selfless contribution it has rendered which have contributed toward enhancing people's livelihood.