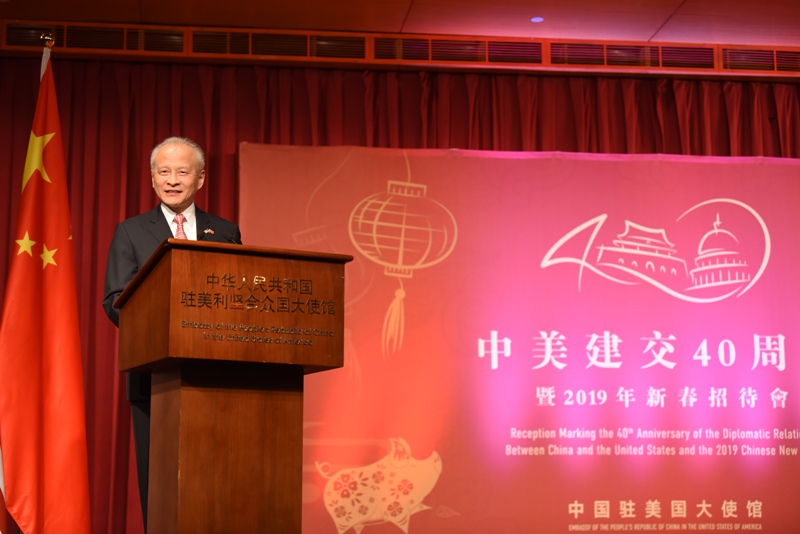 Ambassador Cui Tiankai at the reception for the 40th Anniversary of China-US diplomatic relations and the Chinese New Year on February 6, 2019. (Photo: china-embassy.org)

GRAND RAPIDS, United States, Feb. 8 (Xinhua) -- It is destructive to hold "zero-sum game" mindset in China-U.S. ties and the two sides need to develop even stronger relationship in the future, said Chinese Ambassador to the United States Cui Tiankai here on Friday.

On Friday, Cui addressed an audience of over 400 people at a public event held by a non-profit organization in the Midwestern state of Michigan, discussing current China-U.S. ties.

The Chinese ambassador noted that some people see competition between the two countries as a "zero-sum" and "winner-takes-all" game, which is "very negative, very destructive" to bilateral ties.

Pointing out that "competition" originally was a good word instead of a bad one in both Chinese and English languages, Cui said the problem today is that "too much emphasis" has been added to it.

We should have competition and at the same time cooperate with each other, the ambassador said. "We should have a win-win result."

Cui also noted that the Chinese and U.S. companies should compete as well as cooperate with each other. "The real story in business is not that black-and-white," he said.

Addressing the luncheon held by the World Affairs Council of Western Michigan, Cui also noted that China and the United States need to develop even stronger ties on the basis of "coordination, cooperation and stability."

Noting that China and the United States are "two very different countries" in terms of history and culture among other areas, he said it is important for the two sides to "have much better mutual understanding" for each other's intention and policy and identify common ground to stabilize the relationship.

"We have so many global issues that we have to work together on," including climate change, terrorism, poverty, pandemics and natural disaster, the veteran diplomat noted.

"No country can handle it all by itself," he added.

Education is one of the main pillars in the China-U.S. ties and we should continue to encourage students to study in each other's country, Cui said.

It is encouraging to see that there is a growing number of Chinese and American students studying in each other's country, the ambassador said.

Hopefully things will continue to be like that, he said.

Cui's remarks were echoed by former U.S. Under Secretary of State Nicholas Burns, who was also present at the event.

"It's terribly important that we continue to have Chinese students," Burns said.

Burns rebuked certain "calls" in Washington to prevent Chinese students from studying some subjects for "national security" reason, calling that a "dangerous" move.

"We do live in a global society and we have to work together" to tackle our problems, Burns added.

This year marks the 40th anniversary of the establishment of the China-U.S. diplomatic relations.

Bilateral trade grew from less than 2.5 billion U.S. dollars from 40 years ago to over 580 billion dollars in 2017. Over the same period, the stock of two-way investment rose from practically nil to more than 230 billion dollars.

Statistics show that as many as 1 million international students came to the United States for study in 2017, and Chinese students accounted for roughly 30 percent.