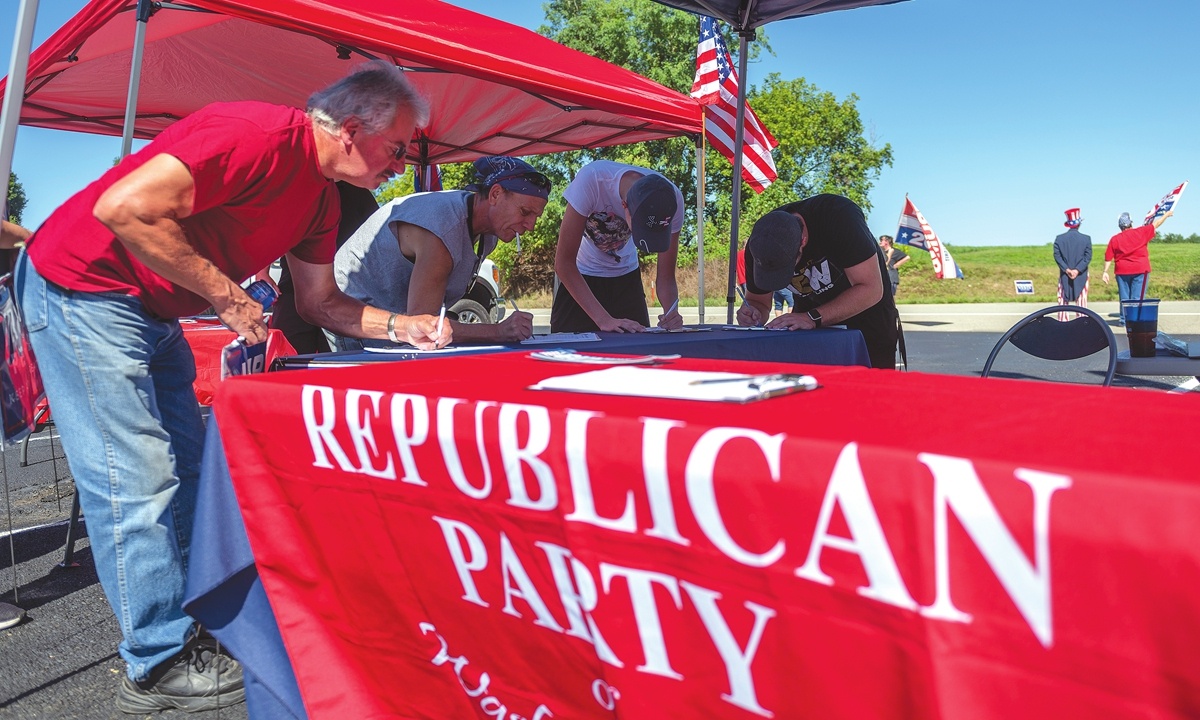 People register to vote during a Republican voter registration in Brownsville, Pennsylvania, the US on Thursday. (Photo: AFP)

Compared with other immigrants in the US, Chinese communities have seemed less "visible" in politics despite their influence in many other aspects in the society.

But the situation is changing, particularly this year, as the COVID-19 pandemic has severely affected millions as the Trump administration inflamed tensions with China and the Black Lives Matter movement has drawn attention to the US systemic racism.

People in charge of Chinese societies in the US told the Global Times that more Chinese Americans are participating in politics, and exercising their rights and power to safeguard their interests.

Ahead of the election on November 3, many Chinese societies said they are encouraging people to vote by providing assistance in hope that their vote could safeguard their communities.

The media have been discussing if Asian Americans, including Chinese, could make a difference in November.

Xu Deqing, a resident of North Haven in Connecticut said that recently, Chinese Americans pay more attention to their votes.

"At present, we often discuss our views on local political issues at family gatherings and WeChat groups. Many Chinese also express their willingness to participate in the election campaign to speak for their community," Xu, also President of the US-China Economic, Trade and Technology Promotion Association, told the Global Times. With the improvement of education level and economic status, nowadays, Chinese Americans pay more attention to their votes, he said.

Xu witnessed the COVID-19 pandemic in the US inspired a sense of responsibility among Chinese. Given the outbreak of epidemic, some voters are casting their ballots by mail. According to Xu, some Chinese non-profit organizations have even made Chinese-language versions of ballot filling tips so Chinese Americans with poor English can participate in the election.

Xu shared that China-US relations and the pandemic are the reasons that have pushed Chinese Americans to vote. "We Chinese in the US feel anxious. We have always felt that China and the US are two great countries with great complementarities," he said.

In San Francisco, Philip Choi, advisor of the Chinese American Association of Commerce, has also noticed the increasing enthusiasm of ethnic Chinese to vote in elections.

"We saw many reports of discrimination against ethnic minorities, which made us want to further protect ourselves and safeguard the fairness and justice of our society," he said. "Only by allowing the mainstream society to hear our voice and making our own contribution to the local development, can we take root in the US."

Chinese have been a significant force in politics among Asian Americans, said Liang Guanjun, Chairman of United Chinese Associations of Eastern US. "In the 2018 midterm elections, 2.576 million Chinese Americans were eligible to vote, accounting for a quarter of the Asian American vote base."

Liang said the Chinese community taking an active part in political affairs can have a positive impact on the cultivation of young people's sense of social responsibility, community safety and the development of the region where they live.

Although many Chinese donate to local political parties and candidates they support, their voter turnout in general has been historically very low. "For a long time, as an ethnic minority, the Chinese were unwilling and afraid to vote," Xu said.

In 1996, Gary Faye Locke won the Democratic primary and election for governor of Washington, becoming the first Chinese American governor in US history.

Ethnic Chinese make up about 1.5 percent of the US population, making them veritable minorities, but many would rather live "quietly," Choi said.

Other Asian groups have similar problems on political involvement. Media reported that only about 49 percent of Asian Americans voted in the 2016 presidential election - lower than the white and black turnout at 65 percent and 60 percent, respectively, and close to the Hispanic turnout at 47 percent.

The Chinese voters had the lowest turnout (41 percent) and also the lowest registered voter rate (48 percent) among Asians.

Chinese Americans have a tendency of caring their own affairs rather than social participation. This is a reason why Chinese Americans had limited passion about voting rights, Li Haidong, a professor at the Institute of International Relations of the China Foreign Affairs University, told the Global Times

Also, many Chinese people in the US found that even though they voted, winning candidates often don't deliver on promises made during their campaigns. "They cannot see much change," Li said.

Immigration, medical insurance and equality are key issues in the 2020 election. The three all involve the interests of ethnic minority groups, including Chinese people, Li said. "The Chinese community in the US would definitely want to avoid it in case they would be affected in the China-US tension, like the Japanese people in the US during the World War II."

The Chinese community in the US is not the biggest minority group, and might not be able to bring much effect to the election. But it is worth it to express their own voices, Li said. 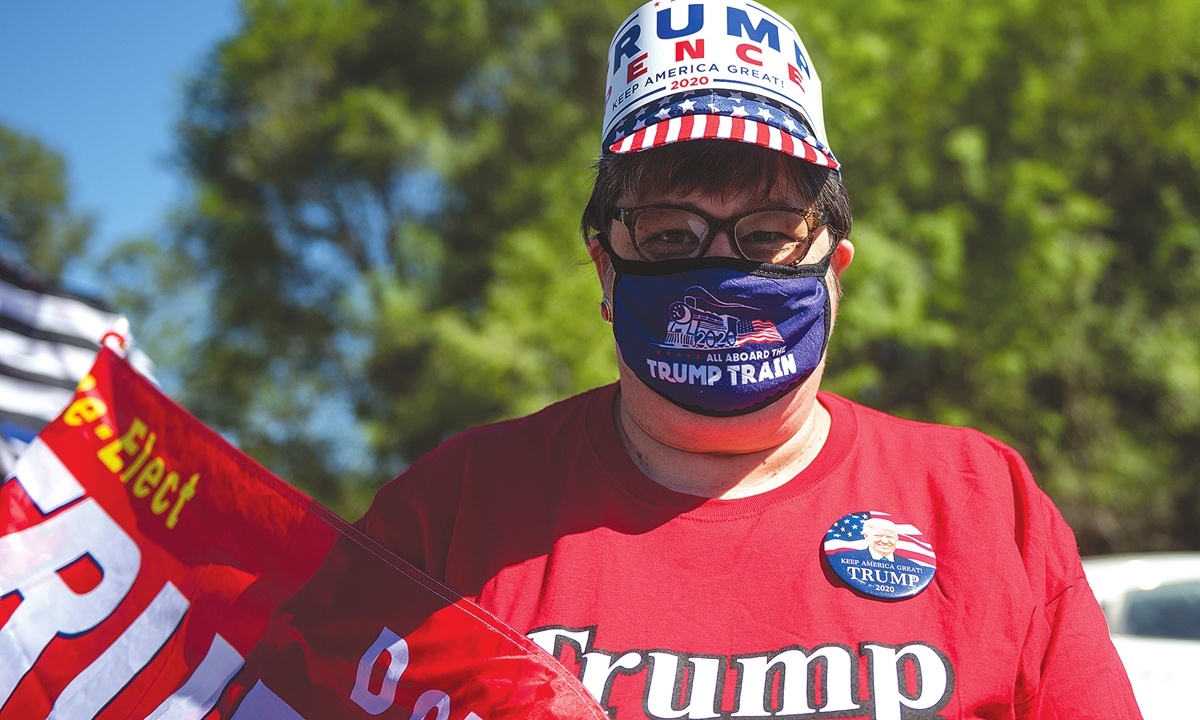 However, who to vote for remains a question. Some Chinese Americans found that none of the two candidates might be their ideal president.

Whether effective or not, the Democratic Party has made efforts to appeal to Chinese communities.

In mid-August, California Senator Kamala Harris was chosen by Democratic presidential candidate Joe Biden to be his vice presidential running mate. Harris has a Chinese name, He Jinli, which makes it easier to attract the support of Chinese voters, but the name might not make up for her hawkishness on China.

Meanwhile, Trump and many Republican politicians seem to have "given up" such efforts, as many Asians said Trump has emboldened racism in America to strike out against Asians and other minorities, according to Pew Research.

"I don't know who to vote for now. Neither Trump nor Biden is a good presidential candidate," Alice (pseudonym), a 50-year-old woman, told the Global Times. She immigrated to the US from Hong Kong with her family at the age of 5 and had the right to vote when she came of age.

Alice has always been cautious during elections because she wants to vote for the more reliable candidate. But Alice said she lost her optimism toward the coming election as none of the candidates brought her hope for that so-called bright American dream. She may vote for Trump considering his financial policies, but is hesitant due to social instability and the administration's failure to control COVID-19.

Alice has a friend who works at a voting center and provides software service support for the election. "Their salary is very high. I think elections itself is a huge waste of taxpayers' money," Alice said.