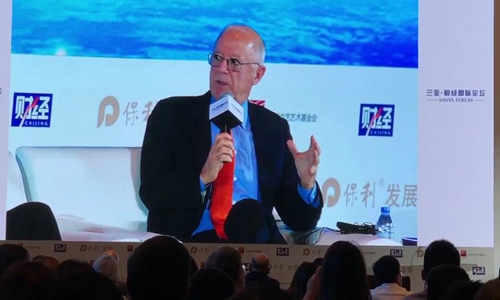 Just days after a top Chinese diplomat called for both Chinese and American companies to stand up against anyone who tries to stir up confrontation and hatred between the two countries, a senior US expert also summoned citizens to do their bit  to bring China-US relations back on track.

President of National Committee on US-China Relations Stephen Orlins called on Chinese and US citizens to stand up to contain and correct a brewing mistrust between the two countries on Saturday at the 8th Sanya Forum in Sanya, a coastal resort city in South China's Hainan Province.

The call comes in the wake of a speech by Chinese Ambassador to the US Cui Tiankai summoning the corporate sector to speak up and act at an event in the US. The market is closely watching whether a phase one trade deal could be signed before December 15.

At the Gala 2019 of the US-China Business Council, Cui said fostering détente is the social responsibility of both Chinese and American companies, which are all stakeholders for the development of China-US relations.

China's Foreign Ministry has said a cooperative China-US relationship is good for both countries and good to the world. However, the risk of decoupling between the world's two largest countries kept increasing with a continuing trade war.

Orlins said even if a deal is signed as a phase one agreement addressing the trade and tariff war, the near-term outlook of the China-US relationship is very pessimistic as incorrect assumptions are taking a firm hold.

He urged citizens of the two countries to speak out and make their voices heard to the respective governments and media as it is the people that ultimately decide the relationship of the two countries. "If you struggle with me, we will win," Orlins said.

Orlins cited a poll published in October by the Chicago Council on Global Affairs in which 42 percent of the surveyed believe the development of China is a critical threat to the US, but 68 percent prefer a policy of friendly cooperation and engagement rather than working to limit China's growth and prosperity.