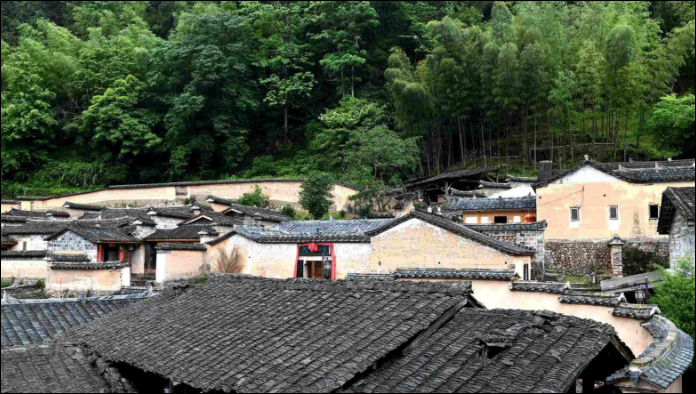 Emilie Lagneau spent her first two weeks in China repairing an ancient house in a remote mountain village in the southeastern province of Fujian.

Together with 16 volunteers, three from France and 13 from China, Lagneau arrived in Jiulong Village.

The two-story house, with a wooden inner structure and rammed earth outer walls, is located in a mountainous area in northern Fujian. The volunteers carried tiles and logs up the mountain, and dug up earth near the house. Under the guidance of three local craftsmen, they built a rammed earth wall to replace a rotten wooden beam.

Lagneau said the manual labor was not a challenge for her as she had been an archaeologist for 10 years. She added that it was her interest in learning the traditional Chinese architectural craftsmanship and adopting them in real practices that drove her here.

"I'm interested in the old way to build houses with wood and mud," adding that "I wanted to have a trip in another country and to learn carpentry. Then I found this work camp online."

After the voluntary work in Jiulong, Lagneau and French volunteer Audrey Garrouste headed to Shanxi Province, another work camp, to repair a historical hall.

Lagneau said she was looking forward to getting to know more about Chinese architectural culture.

Hu Xiaowen, a volunteer and interior designer, said she appreciated the way the traditional houses were built.

The external walls make the houses cool in summer and warm in winter. The houses are strong, durable and eco-friendly, as they adopt local raw materials.

"There are some Chinese architects who are accommodating rammed earth walls into modern construction, for the purpose of sustainability," Hu said.

Most of the old houses in the region were built by the ancestors who migrated from central China during the Southern Song Dynasty (1127-1279).

Ding, however, was worried about the preservation of these ancient buildings. "In recent years, young and middle-aged people have left the village to seek job opportunities, leaving about 90 percent of these old houses vacant and unprotected," adding that "these houses will disappear in several years if without some preservation efforts.”

Zhan Zhenfen, who taught the volunteers how to make rammed earth walls using raw materials such as earth, clay, gravel and straw, said the last time he did such work was in 1986. "Villagers used to build these houses on their own. But now, people under 50 don't know how."

Since the 1980s, villagers began to move into brick or concrete houses with modern facilities, leaving many old ones abandoned.

More than 120 ancient houses still exist in Jiulong, among which two were built 400 years ago, and another seven about 200 to 300 years ago.

Jiulong Village is just an example of tens of thousands of fading ancient villages in the country.

A report on the protection of China’s ancient villages released in 2017 revealed that China has lost about 920,000 ancient villages in the past 15 years, and now it still sees more than one village fading daily.

For eight years, the work camp has invited Chinese and French volunteers to repair heritage sites, such as temples, former celebrity residences, and city walls, in the two countries.

This was the first time the work camp chose Jiulong, where “Tucuo” (means ancient houses in the Hokkien dialect) mud houses have been home to locals for more than 1,000 years.

Liu Chunlan, the team leader, said, "Villagers used to think that their hometown was a place left behind by modern development, but our arrival and labor can provide them with an outsider perspective and let them see the value of the traditional architecture in their hometown," said Liu.

Local villagers were curious about their repair work, and some even joined in, with many children eager to learn the techniques.

Wu Chunsheng, a local official, said the local government had encouraged villagers to repair their deserted houses for the sake of their later generations.

Wu said the county was preparing to build an artist base in the village to attract painters, photographers and sculptors to create works inspired by the idyllic rural scenery, and create more jobs for the locals.