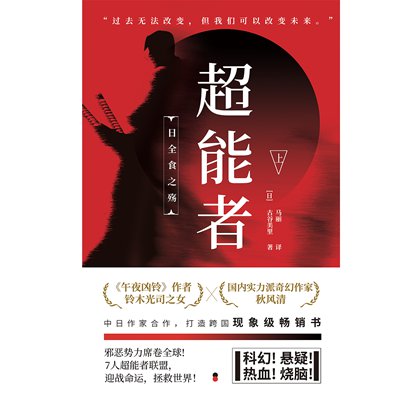 The cover to the Chinese version of Volume I of Extension World Photo: Courtesy of Beijing Xiron Books Co, Ltd

The cover to the Chinese version of Volume II of Extension World Photo: Courtesy of Beijing Xiron Books Co, Ltd

Imagine a team of heroes consisting of gene-altered people with abilities such as teleportation and telepathy, then mix in a healthy dose of ninja action and an evil organization; what you get is a rough outline of Extension World, a shared-world novel co-written by Chinese and Japanese authors looking to create a superhero fantasy set in the East.Recently published by China's Beijing Xiron Books Co, Ltd and Japan's Discover 21 Inc in Chinese and Japanese respectively, the two-volume novel was officially launched at a ceremony held in Beijing on Sunday. Heads from the two publishing groups, as well as the first novel's Chinese and Japanese authors, Qiu Fengqing and Misato Furuya, attended the event. "The story is about a team similar to an Eastern version of The Avengers," said Furuya at the press conference. "But the biggest breakthrough that we made was to produce an Eastern style story."Furuya's father Koji Suzuki - the renowned Japanese horror novelist best known for his Ring series and who is also involved in a separate Sino-Japanese project headed by the publishing houses - also attended the ceremony on Sunday to help promote his daughter's new book.An Eastern storyInstead of purposely filling every page with representative Asian elements such as Chinese martial arts and Japanese samurai, the story, which unfolds in places ranging from Tokyo in Japan to China's Dunhuang, combines the in-depth depiction of human psychology typical of Japanese thrillers and the fast-paced plotting often seen in modern Chinese novels."The way Chinese and Japanese writers deal with human emotions and weave storylines is in itself an Eastern element," said Qiu at the press conference. "Anything we write is definitely an Eastern story. We could never create a Hollywood story because we see things differently."The shared-world project started in 2014 when the two publishing houses agreed to produce a superhero-themed science fiction novel targeting readers in both markets. After Qiu and Furuya were chosen as the writers, the project team drafted an outline of the story and the main characters, then let the two authors fill in the details. As Furuya began writing the book's first volume, her part was simultaneously translated into Chinese and sent to Qiu for reference so he could work on the second volume at the same time. The first volume of the novel focuses on the Japanese hero Miyamoto Shun, while the second features the Chinese character Gao Cheng as the lead. Both of the two super-powered characters belong to a seven-man team dedicated to stopping the notorious SNP Institute.Constant communicationA three-year effort involving thousands of e-mails and some 200 hours of phone meetings, the novel is looking to take on both the Chinese and Japanese markets even though the two countries' readers have very different reading habits, according to Shen Haobo, head of Beijing Xiron Books Co, Ltd, and Yumiko Hoshiba, president of Discover 21 Inc, at the press conference."But we managed to find similarities during the process, which allowed us to produce a work that we think both countries' markets will accept," Hoshiba noted.Besides having to deal with language barriers, the different styles of writing also posed a challenge. Neither side was satisfied with the first drafts that the writers handed in.Furuya mentioned that the Chinese publisher kept telling her to cut out the lengthy passages describing characters' thought processes and focus more on progressing the story."It's interesting, the Japanese publishing house was asking Qiu to add in more insight into the characters' psychology while the Chinese publishers were telling me the opposite," Furuya said. Moreover, as both writers had to depict the Chinese and Japanese main characters in their part of the story, they would often have to consult each other, especially when it came to culturally specific features.Qiu recalled he once created a ninja character in his part of the story, "But the Japanese side was confused by the character and asked me 'what is this supposed to be?' It was then that I realized that my understanding of a ninja was nothing more than a stereotype."Future potentialAccording to Shen and Hoshiba, the project actually encompasses more than just the novels. The publishers also plan to expand Extension World into other areas such as movies and TV productions.The popularity of Japanese literature adaptations has continued to grow in China over the past two years, such as this year's Chinese-produced film adaptations of Japanese writer Keigo Higashino's The Devotion of Suspect X and Miracles of the Namiya General Store (to be released in December). With this in mind, industry insiders from both countries were also invited to sit down and discuss the potential of Sino-Japanese cooperation on Sunday.One of the key reasons why such productions are well received in the Chinese market is, first and foremost, that the Japanese literature works they are based on have a huge fan base in China, such as the works of Haruki Murakami or Keigo Higashino, Shen noted. However, how to localize these Japanese stories to fit the Chinese market has been an incredible challenge. Huang Hai, the Chinese screenwriter for the Chinese film adaptation of The Devotion of Suspect X, shared his experience working on the film at Sunday's event."It took a lot of effort to turn the film's characters and emotions into something that the Chinese audience would sympathize with," Huang said, also mentioning that every minor adjustment they made needed to be signed off on by the Japanese author."I think whatever form cooperation takes, it will mainly be about breaking stereotypes and cliches," noted Suzuki, who said he firmly believes that the Extension World project is sure to create new chemistry by merging elements from both sides.