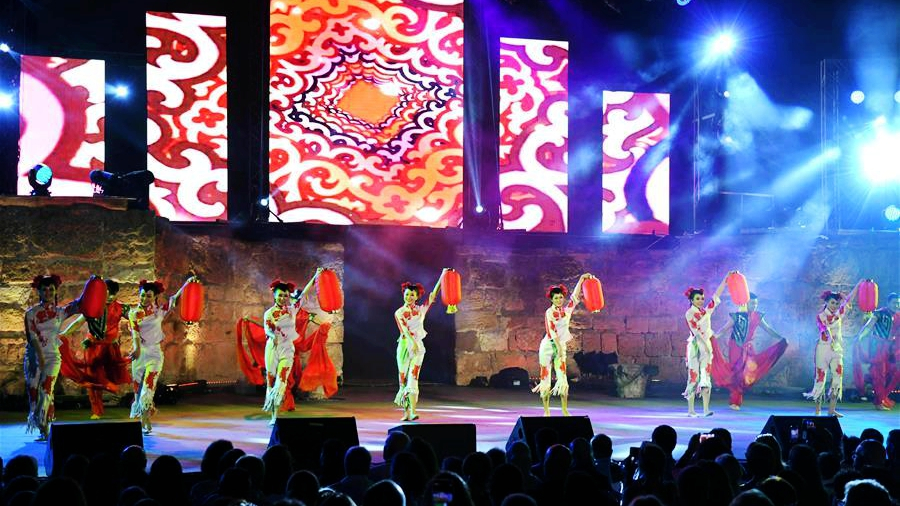 Thunderous applause and cheers were given to five young Chinese performers when they presented a breathtaking handstand performance in Tunisia's open-air Roman amphitheater Saturday night.

Built in the 2nd century and with a capacity of 10,000 spectators, the Roman amphitheater was full of Tunisian audience dazzled by a visiting Chinese art troupe.

This special art performance was part of the 54th International Carthage Festival in Carthage Amphitheatre in Tunis, capital of Tunisia.

"I'm a fan of dancing, and I love the performance so much," said Mahbouli.

Mahbouli said various kinds of art are combined together in the performance, including Chinese ballet and Chinese acrobatics. "It is an innovative and creative idea."

"Chinese artists are very diligent, the big screen in the background demonstrated natural elements, such as water, fire and air," said Mahbouli.

"I think they want to convey a message that people and nature should live in harmony," she added.

The Guangxi Culture and Art Troupe from southwest China's Guangxi Province took part in the festival, one of the most prestigious art events along the Mediterranean.

Some 35 Chinese actors presented ballet, acrobatics, folk dance, and other programs to the Tunisian audience.

"This is the first time that my family watched Chinese art performances. We like everything, such as the clothes, the performance, the music and the stage design. It makes us more interested in Chinese culture," said Abdelkafi.

"Such cultural exchange activities provide good platforms between Tunisian and Chinese people. Art has no borders, and art exchanges could help strengthen mutual understanding and trust between our two peoples," Yan said.

"The cultural exchanges between our two countries are becoming closer, and we welcome more Chinese artists to bring culture and art in the future," said El-Abidine.

"Such performances help deepen and promote cultural exchanges between China and Tunisia," the minister added.

Wang Wenbin, Chinese Ambassador to Tunisia was grateful for the frequent artistic exchanges. Sino-Tunisian cultural ties have witnessed rapid development in recent years, and the two sides will deepen cooperation in the future.

"The two countries have signed agreements on the mutual establishment of cultural centers, and it will help promote Sino-Tunisia cultural exchanges to a higher level," said Wang.