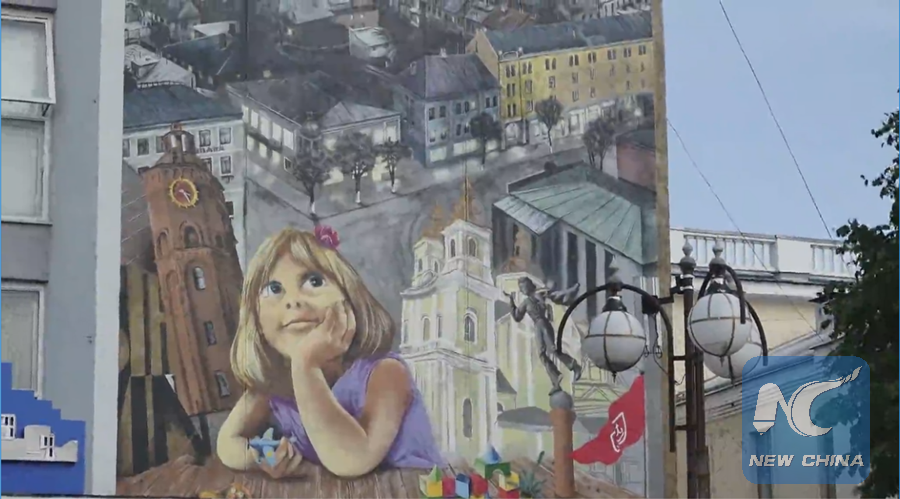 This photo taken from a footage shows a painting on the exterior of a building in Vinnytsia, Ukraine on June 6, 2018. (Photo: Xinhua)

"I would like to share my culture with Ukrainian artists and art lovers and let them know more about China and its paintings," Qi Shaoting, an artist representing China, told Xinhua at the 2nd international plein air art festival "The Best Artist" in central Ukraine.

Qi is one of 18 artists, who attended the festival in Vinnytsia city in the historic region of Podillia from seven countries.

Early in the morning, when the sky is filled with colorful sunrise, the artists took to the streets of Vinnytsia to paint the city's landscape and architecture in the open air.

The Chinese painter has found inspiration in the ancient Water Tower, the architectural landmark of the city, located in the central park.

The 28-meter-tall Water Tower with a two-meter-diameter clock and narrow windows is a vivid example of Ukrainian classical urban architecture.

On the sketch painted by Qi in the traditional Chinese painting (Guohua), the tower looks extremely unusual surrounded by bright red and pink flowers and elements of Chinese calligraphy.

To create the masterpiece, Qi has combined Chinese and European art techniques, using standard synthetic brushes and the Chinese calligraphy brushes made of goat and rabbit hair.

"Chinese brushes are very elastic. By using them, you can get thick lines and thin lines, intensive and light strokes," the painter explained.

Despite the early hour, the passers-by encircled the stand of the Chinese artist, getting intrigued by the unusual picture.

"I really like it, it's very beautiful, especially the flowers. I saw how the other artists paint, but I did not see the similar painting," Roman, who stopped near the picture while heading to his work at a bee farm, told Xinhua.

Another Vinnytsia resident, Petro, who walked his dog in the park, said he was surprised that the foreign artist has managed so delicately feel the beauty of his native city and display it on canvas.

"The foreign artist saw the heart of Vinnitsia. The picture is really beautiful. I have no words. It is very nice and tasteful," Petro told Xinhua.

The artwork of the Chinese painter has not only won the applauses from Vinnitsia residents, but the artist also was interviewed by local media, with two film crews interviewing the artist.

Trying to hide her embarrass, Qi said she was much surprised with all of the attention to her creative activities.

"Of course, I was very pleased that so much attention is paid to the Chinese art and China in general," she said, voicing the hope that the 10-day festival will help promote cultural exchanges between China, Ukraine and other countries.