A Chinese-Australian woman’s work residence visa was rescinded as a result of not complying with quarantine measures during her stay in Beijing, local authorities said on Thursday. 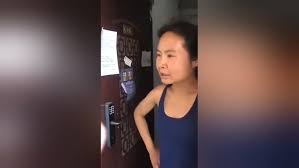 The 47-year-old woman, surnamed Liang, returned to Beijing from Australia on March 14 with a work visa valid until September 5, 2020.On March 15, Liang, who was supposed to be self-quarantined as required by local authorities, went outside for a jog without wearing a surgical mask.

When a residential complex staff member tried to persuade her to wear a mask, Liang gave the staff a bad attitude, refusing to show her passport or cooperate with the staff until the police arrived.

The video of Liang shouting at the staff immediately went viral on Chinese social media. Shortly after, the China branch of Bayer Healthcare, the company that Liang worked for, announced that she was fired.

Beijing police warn that all people entering Beijing from countries and regions outside China must follow epidemic prevention regulations of the city government. Legal punishments will be brought down on those who violate relevant regulations.