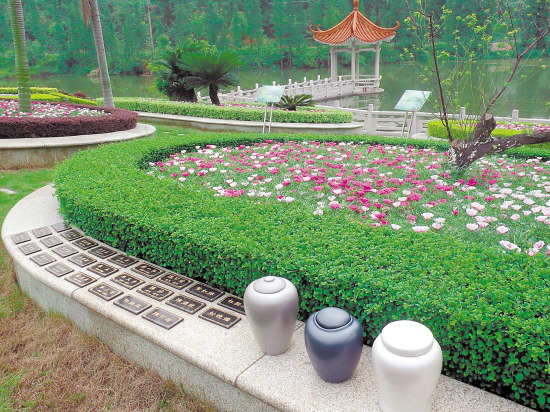 Chinese civil affairs authorities are set to offer subsidies to those who adopt eco-friendly burials, reported Chinanews.com on Friday.

A draft of the regulations on funeral management released by China's Ministry of Civil Affairs suggested that local authorities should offer subsidies to those who adopt eco-friendly burial options that neither occupy lands nor keep the bone ashes.

Those who choose eco-friendly burial options normally do not set up gravestones in the tomb as the bone ashes are buried under the grasslands or tree roots, or just being spread into the sea.

But the draft suggests setting up a public memorial facility for those who adopt eco-friendly burials and do not keep the bone ashes.

Since China has been facing the shortage of land resources for so many years, the country has actively encouraged its citizens to adopt cremation rather than traditional burials, in order to save more land.

The draft suggests that the regions where population is dense, land resources are scarce, while transportation is well-developed, should adopt cremation. However, for regions that do not have the capacity to implement cremation, the traditionally favored burials – land burials – are allowed.

In regions that implement cremation, the authority encourages that the burial of ashes should be implemented in a manner that does not occupy any land or store in the urns that only occupy a small scale of land. While in places where the traditional burials are allowed, the authority encourages the deep burials of bodies and leaving no gravestones.

As traditional Chinese hold the belief that burial is the proper way to handle a dead body, many people invest heavily in their parents' tombs to show filial piety, according to Xinhua News Agency.

However, due to the land scarcity, the prices of grave plots become more expensive, which normally cost 80,211 yuan (about $12,340) for each grave in 2015, reported Xinhua News Agency.

In order to relieve people's financial burden of burial process, the draft states that the country is set to establish a public service system for funeral, providing with services such as transporting bodies, temporary storage of bodies, cremation, storage of bone ashes and all sorts of basic burial options.

For people who live under the country's minimum subsistence level, the authorities would offer them the basic funeral services free of charge.