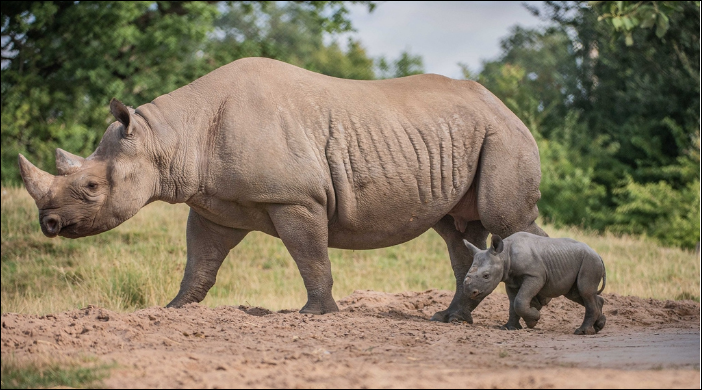 A one-week-old rhino calf born at Chester Zoo has ventured outside to play for the first time. (VCG Photo)

Governments' crackdown has dramatically plummeted the price of rhino horns that were selling at a rate twice that of gold. Despite crashing price, pachyderm's poaching continues unabated in South Africa, a new report revealed.

Vietnam -- the second largest rhino horn market -- recent ban on the product also contributed to the dramatic decrease in the price.

In 2008, rumors that rhinos horn could cure cancer and prevent hangovers further fueled the demand in Vietnam.  As a result, the rate of rhino poaching in South Africa exploded from 13 in 2007 to the over 1,000 in 2013.

Researchers believe rapid economic growth and rising incomes in China and Vietnam escalated rhino poaching. Within two decades from 1975 and 1995, black rhino numbers plummeted from 65,000 to fewer than 2,500.

Over the years, both countries decided to act on the trade to save wildlife. "As rhino prices have dropped and tens of millions of donor dollars have been spent on enforcement in South Africa, poaching is still rampant," WildAid CEO Peter Knights said.

According to WildAid when the ivory prices reduced by two-thirds and enforcement efforts stepped up in places like Kenya and Tanzania, there was an 80-percent drop in poaching. In case of rhino horn, prices have crashed, enforcement enhanced, still poaching continues.

Corruption is a massive problem.

"Poachers have been arrested or even killed, but middlemen and kingpins have avoided jail time. Adding to the problem much of the rhino horn flows through neighboring Mozambique." Knights said.

Senior officials of WildAid highlighted a case in which, seven key members of a rhino horn poaching and smuggling syndicate, involved in trafficking of rhino horns were arrested in South Africa this week. "Five of them were current or former police officers," officials revealed.

The report also reveals that demand reduction efforts have begun to take effect with higher levels of consumer awareness leading to a significant decline in rhino horn prices. "Despite low prices, rhino horn trade is still a profitable business for poachers," the report said.

Meanwhile, South Africa's Department of Environmental Affairs released new figures showing that 508 rhinos have been poached during January-August period, a 26 percent decrease compared to the 691 killed during the same period last year.