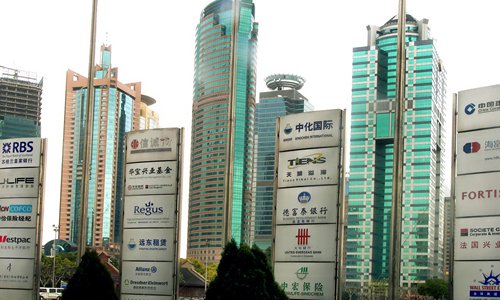 A view of Lujiazui, the financial district of Shanghai. (Photo: VCG)

China Merchants Bank (CMB) was recently suspected of inviting a feng shui master (also known as geomancer) to come to its End of Year Ceremony.The incident was widely considered to be a blessing for the coming year's business and economy.Two pictures released from the China Merchants Bank's End of Year Ceremony went viral online. One reads: "Deciphering fortune, planning for the future, welcome to the China Merchants Bank 2018 annual grand ceremony." A profile of a middle-aged man is attached beneath, introducing him as a "master of Chinese metaphysics…who has successfully made thousands of predictions, large or small, such as the 2011 Japanese tsunami and the trend of 2015 A shares..."The other picture is a PowerPoint slide presented at the ceremony, introducing tips for designing a room following feng shui logic. For example, aquatic plants are needed in the southeast corner of the house, while copper items should be put in the southwest. In ancient China, feng shui focused mostly on burials. People believed back then that the location of ancestors' graves could influence their children's lives, even bringing them good luck and success if placed correctly. But feng shui has evolved and now is primarily about developing harmony between humans and nature through architectural design. Many enterprises hire local feng shui masters to advise on the most auspicious layout and design of their buildings for ensuring optimal luck and flourishing business.However, this has raised controversy online among many who say that banking is supposed to say in the laws of science. Many say feng shui is superstitious. Some also suggest that it partly reflects bankers' anxiety over recent economic stagnation and a drop in CMB's stock prices. As of press time, CMB has not made any response or clarification on this matter.An insider from CMB told the Global Times that the move may not be for CMB to reverse its fortune, but for CMB's major clients. The bank itself may not believe in feng shui, but provides it to satisfy key customers.Though he cannot confirm it, the insider believes the incident very likely happened. He claimed that feng shui is very popular among financial workers and clients, especially those coming from Southeast China and Hong Kong.

This is not the first time that bankers have used feng shui masters. Media reports say that CMB had held several lectures on feng shui. The reports allege that the lecture combines traditional feng shui concepts with modern science to "answer the puzzles in your life." In November 2016, Xie Xianglin, a fortune-teller well-liked by many real estate companies, was invited to give a lecture at CMB. Last August, Wu Yansong, another fortune-teller who claimed to be good at getting officials promoted through feng shui, gave a speech on divination to clients at the Yancheng branch of CMB, thepaper.com reported.Others, including the Postal Savings Bank of China, Bank of China, and Bank of Communications, have all reportedly provided forums and salons on money management using feng shui. Science versus metaphysicsInviting a fortune-teller or geomancer to present at the ceremony of any enterprise is not rare in China. Although a number of pseudo-goemancers have been revealed as frauds, their fan base seems to be more loyal than before.  A Taoist priest was invited this April to expel evil spirits for a project initiated by the Chinese Academy of Sciences. The priest held an amulet and incanted mantras at the opening ceremony. The incident was later exposed and stopped by the government.In Hong Kong, where the economy is more developed, feng shui is popular. It was considered in the design of many buildings, including the HSBC main office in Hong Kong. The essence of this is to help make the buildings harmonious and business prosperous by consulting feng shui masters.Li Daxiao, chief economist at Shenzhen-based Yingda Securities, told the Global Times that feng shui has long been a tradition in China's financial sector, especially when it comes to the actual start of the New Year. Investors and bankers often pray for the New Year in that way. The move may also be seen as a hope for better economic trends in 2019. But Li doesn't think it has relevance with the sharp drop in the bank's stock or the fluctuations in the overall economic situation.