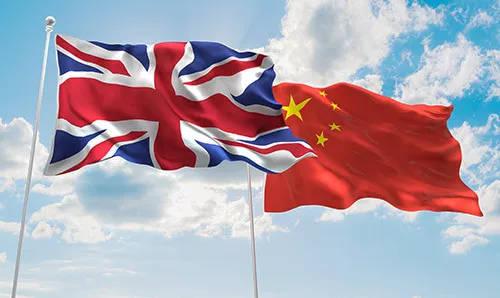 Wang said that Chinese President Xi Jinping had two phone conversations with British Prime Minister Boris Johnson last year, which pointed out the direction for the development of bilateral relations.

Noting that China-Britain relations have a deep foundation and strong driving force, Wang said that China has always attached importance to Britain's international status and is willing to become a partner of a "Global Britain."

Despite the impact of the COVID-19 pandemic, bilateral trade volume between China and Britain grew amid a global downward trend last year, and China became Britain's largest trading partner in goods in the first quarter of 2021, fully demonstrating the resilience and potential of the two countries' economic and trade relations, Wang said.

As permanent members of the United Nations Security Council, China and Britain should fulfill their international responsibilities, step up communication and coordination, work together to tackle global challenges such as the COVID-19 pandemic and climate change, maintain world peace and stability, and promote global economic recovery and sustainable development.

Noting that it is an objective reality that there are differences between the two sides due to their different historical and cultural backgrounds, different stages of development and different perspectives on issues, Wang said that what is important is that the two sides should conduct equal dialogue in the spirit of mutual respect, so as to enhance understanding, dispel doubts, clarify facts and distinguish right from wrong.

Microphone diplomacy is not advisable, Wang said, adding that neither does "small clique" politics meet the requirements of the times.

Wang also elaborated on China's principled position on issues related to Hong Kong and Xinjiang, stressing that the "one country, two systems" policy is China's basic state policy, which China will unswervingly and consistently adhere to.

All what China has done in Hong Kong is to ensure the "one country, two systems" policy is steadily implemented and fare well, he said, adding that the effort to improve the electoral system of the Hong Kong Special Administrative Region is gaining widespread support in Hong Kong.

He also pointed out that Xinjiang-related issues are in essence about countering violent terrorism, separatism and radicalization, adding that the Chinese side welcomes foreign visitors to Xinjiang to learn about the real situation, but does not accept so-called "investigation" based on a presumption of guilt.

China is ready to continue exchanges with Britain on sensitive issues with an open attitude, Wang said, adding that the British side should respect China's sovereignty and territorial integrity, the development path independently chosen by the Chinese people and China's right to handle its internal affairs without interference.

Raab said that Britain-China relations have a deep and solid foundation. Although there are differences between the two sides, he said, the British side is willing to strengthen exchanges and rational communication with China in the spirit of mutual respect and seeking common ground while reserving differences, so as to continuously enhance mutual understanding and let cooperation rather than differences define bilateral relations.

The British side highly appreciates China's major achievements in fighting the pandemic, and is willing to further deepen coordination and cooperation with China in public health, the Belt and Road, economy and trade, climate change and other fields, Raab said.

The two sides also exchanged views on the Iran nuclear deal, the Korean Peninsula issue and the situation in Myanmar.