She no longer needs to get up at 5 o'clock in the morning to catch the ferries for school, nor does she have to be worried that the ferries would be suspended due to extreme sea conditions.

Aisha is thus among the locals and foreign tourists who applaud the bridge connecting the Maldivian capital of Male with neighboring Hulhule island, where the Indian Ocean island nation's only international airport is located.

The 2-km-long bridge, inaugurated on Aug. 30 last year, is an iconic project of the Maldives and China in co-building the 21st Century Maritime Silk Road. The bridge makes it possible for locals and tourists to travel between the two islands within five minutes.

Aisha, who lives in Hulhumale, a reclaimed island developed for housing complex northeast of Hulhule and Male, takes a ride on her father's motorcycle every morning to her school in Male. 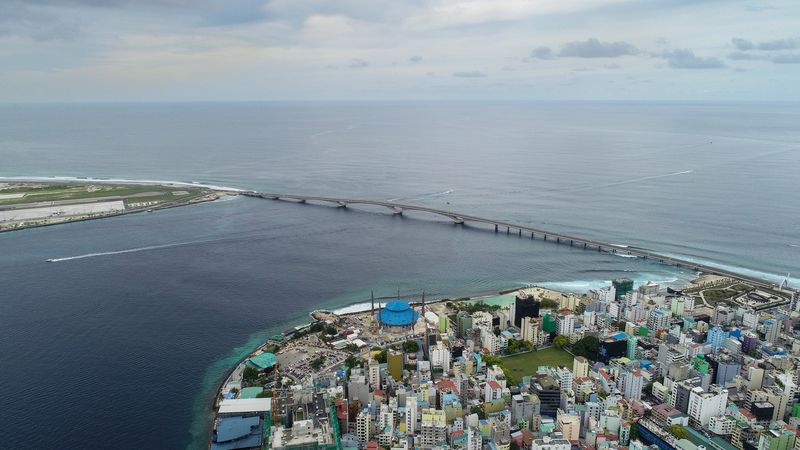 "Reaching school in 10 minutes is impossible before the bridge was opened to traffic," she said.

Aisha had to wake up early on school days, but was set to be late for school when the ferry service was postponed or suspended due to rough seas.

"I was so afraid when there were high waves in the sea. Anyway, after the bridge is built, I won't need to get up at 5 o'clock in the morning anymore!" she grinned.

Echoing Aisha, university student Nahula Ali, who also lives in Hulhumale, said bad weather made her miss at least two exams when she was a senior high school student before the opening of the bridge.

"The bridge has made our life more convenient," she told Xinhua.

For years, Maldivians have relied on ferries as their means of transport between the atolls. As such, the bridge built by the Second Harbor Engineering Company (SHEC), which is affiliated to the China Communications Construction Company, is a life-changing and long-awaited project for locals.

Maldivians highly appreciate the Sinamale Bridge, or the China-Maldives Friendship Bridge. A huge painting of the landmark bridge can be seen at the Rehendhi Maizaan park in Male. 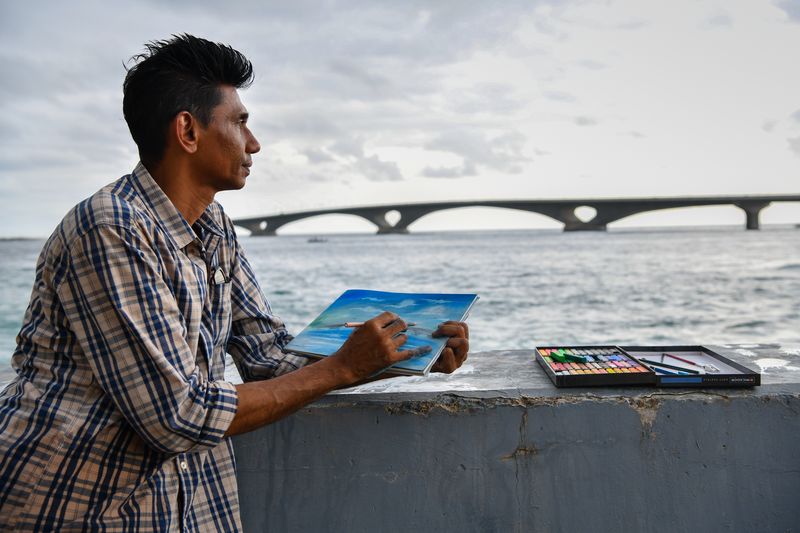 Artist Ali Amir works on a painting of the China-Maldives Friendship Bridge near the bridge in the Maldives, Aug. 27, 2019. (Xinhua/Du Cailiang)

Artist Ali Amir said that he got an assignment from the government in 2016 to paint the Sinamale Bridge on the walls of the park, which was about to open at that time.

"The first time I was traveling on the bridge is really amazing," Amir said.

"I never imagined it because this is a channel you should be crossing on the boat and now you are going high and seeing the beautiful view of the capital city and the airport. It's a kind of feeling like that you are flying over the ocean," he said.

On the map, the Sinamale Bridge looks like a carrying pole with Male and the island of Hulhule on each side, not only linking Male, Hulhule and Hulhumale together, but also bettering the habitation circle around Male.

Midhuam Saud, vice president of the Maldives-China Trade and Cultural Organization (MCTCO), said that Male has a population of over 100,000 living on a small area of about 1.5 square km. To ease housing congestion in the capital city, the Maldivian government is working on affordable housing projects in Hulhumale. 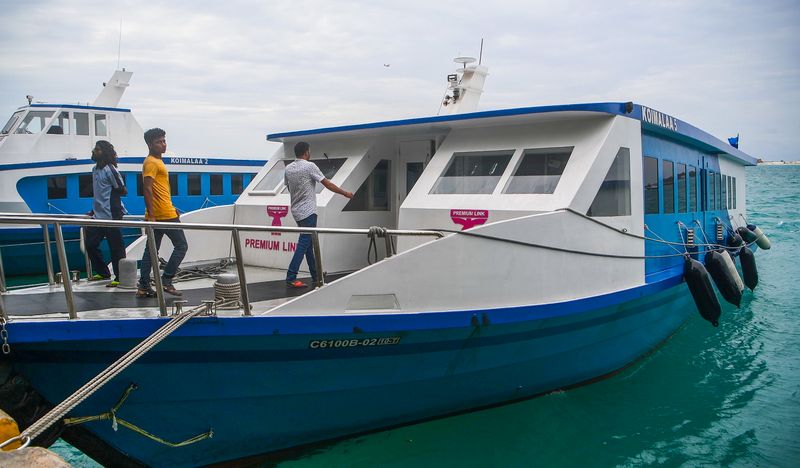 Passengers board a ferry at a pier in Hulhumale, the Maldives, Aug. 29, 2019. For years, Maldivians have relied on ferries as their means of transport between the atolls. (Xinhua/Du Cailiang)

Although the monthly rent payment increased from 22,000 Maldivian rufiyaa (1,420 U.S. dollars) to 25,000 rufiyaa (1,614 dollars), Rasheed said it was a reasonable deal as their new home was almost twice the size of that in Male.

Hulhumale is known locally as the "Youth City", which is at least three times larger than Male, and has restaurants, parks, a stadium and beachfront. The opening of the Sinamale Bridge has made the artificial island easily accessible to residents in Male.

Rehendhi Rabindan, a foreman at a restaurant in Hulhumale, said the bridge has made the restaurant more popular.

"Since the bridge was opened to traffic last year, the number of guests visiting the restaurant has increased significantly. On weekends, many people living in Male come here for dinner. The staff are constantly busy," he said with excitement.

"What's more, many guests who live in Male could order takeaways and pick up the food within 10 minutes," Rabindan added.

Waheed, who operates an auto repair shop in Hulhumale, also witnessed his business boom with the help of the bridge.

"Twelve employees in the shop are very busy every day. We can also drive a repaired car to Male for the customer if requested. It's impossible before the bridge was open to traffic," he said. 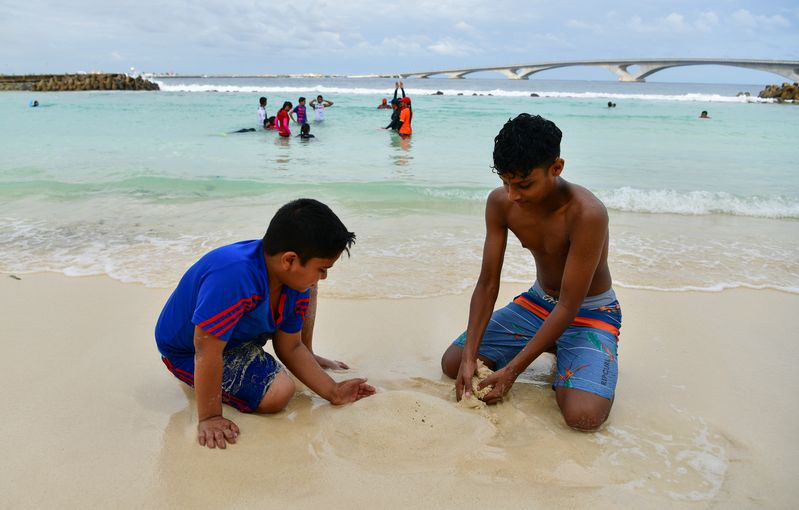 Two boys play on the beach near the China-Maldives Friendship Bridge in the Maldives, Aug. 27, 2019. (Xinhua/Du Cailiang)

A survey conducted by the MCTCO showed that the connectivity enabled by the bridge has had positive social, economic and environmental impact on the Maldives.

"It has had huge positive impact on the livelihood of individuals as well as the business community," said MCTCO Vice President Saud, who went to China about 10 years ago to learn the Chinese language.

Known for its turquoise sea, white beach and blue sky, the Maldives is one of the most romantic destinations for honeymooners. However, for the Chinese constructors involved in building the bridge, the experience of working in high temperature, high humidity and high levels of ultraviolet radiation was far from romantic.

There was also one caveat: the Sinamale Bridge is constructed in 46-meter-deep waters with a long surge cycle and extremely complicated coral reef geology.

"Soon after the project broke ground, we came here to prepare for the landing stage. As the construction site had a high wave of over 3 meters, a maximum surge cycle of 14 seconds and a current speed of over 1.5 meters per second, we had to have a 'watcher' in charge of observing waves when we began construction," said Cheng Duoyun, chief engineer of the Sinamale Bridge project. 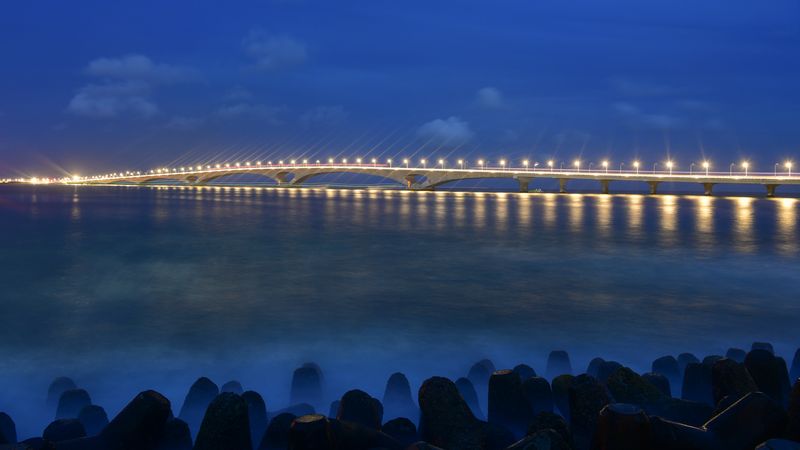 "Once a surge was coming, the watcher would give an immediate warning. Upon hearing of the observer's shout, workers would stand up instantly with their welding tongs raised high, and continued welding after the waves died down," Cheng.

Cheng told Xinhua that during the 33-month construction which started at the end of 2015, Chinese engineers and workers had achieved a number of key technological breakthroughs and had pioneered the construction of large bridges under deep, exposed ocean environment with a coral reef geology.

"The success of the bridge has also prepared us for similar projects in building the 21st Century Maritime Silk Road in the future," he said.

On the first anniversary of its inauguration, the SHEC will conduct a quality check of the bridge to ensure that it meets all design requirements in the complicated ocean environment. 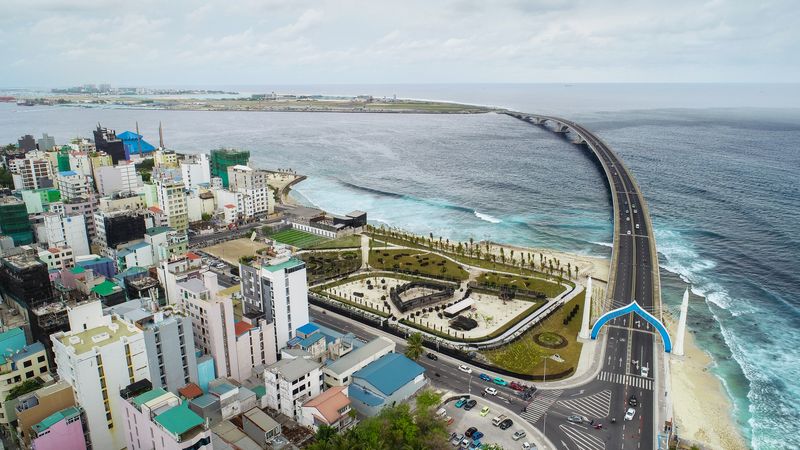 Many Maldivians had thought building the cross-sea bridge was "an impossible dream." However, their dream came true.

"This bridge connects our today and tomorrow; our present and our future. Opening of this bridge was not the end but the very beginning of the Maldivian Dream," said MCTCO Vice President Saud.