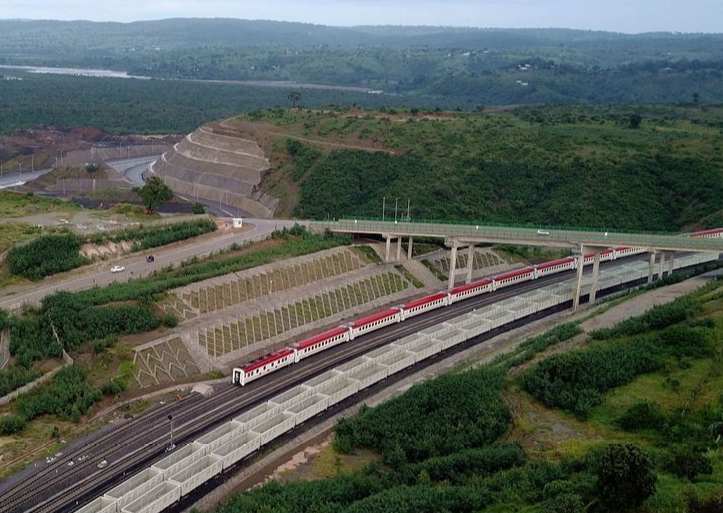 Modern infrastructure projects like roads, ports and railways that are either financed or built by China have injected vitality into the country's transformation agenda, senior officials and experts said.

Philip Mainga, acting managing director of Kenya Railways Corporation said that China's immense contribution to expansion and upgrading of transport infrastructure in Kenya has unleashed benefits to the economy and citizens.

"There is no doubt the infrastructure projects financed and developed by China are making huge impact in the country especially when you look at the ease of travel and employment opportunities," Mainga told Xinhua recently.

He singled out phase one of the standard gauge railway (SGR) project that was launched on May 31, 2017 for ensuring there is seamless movement of people and cargo between the port city of Mombasa and the capital, Nairobi.

"The SGR phase one also created so many jobs and new opportunities for local entrepreneurs who supplied construction materials like cement, steel and sand," said Mainga.

He said that phase 2A of SGR whose implementation has entered the final stretch will stimulate commerce and investments in the Kenyan hinterland.

China has overtaken external lenders to become largest financier of infrastructure projects that have positioned Kenya as an unrivalled transport and logistics hub in the region.

The Africa Construction Trends launched by consultancy firm, Deloitte in December 2018 indicated that Kenya had the highest number of infrastructure projects financed by China across the eastern African region.

"Kenya has benefited from infrastructure projects built by the Chinese and they range from job creation, faster movement of people and goods," said Mengich.

"The future prosperity of this country is dependent on interconnectivity and China is helping us achieve that goal," he added.

"These infrastructure projects have changed the image of our country for the better and we are witnessing an improved investor confidence thanks to ease of travel," said Kamau Njuguna, a member of East African Chamber of Commerce.

Njuguna said that completion of phase 2A of SGR project that will link Nairobi to the resort town of Naivasha, will have positive impact on horticulture and tourism.

"The railway line will cut down on cost of travel from Nairobi to Naivasha and the benefits will be felt by horticulture farmers as well as local and foreign tourists," he told Xinhua.

Kenyan youth have acquired skills and gainful employment thanks to Chinese-funded infrastructure projects like the Standard Gauge Railway that is a critical component of the Belt and Road Initiative.

Boniface Musimba, a technician at phase 2A of SGR said that knowledge and skills transfer has become a defining feature of China-built infrastructure projects.

"The positive impacts of infrastructure projects financed by China include employment creation, transfer of skills and knowledge that will benefit us in the long-term," said Musimba.

Local communities too have gained from modern infrastructure projects financed by China thanks to reduced cost of travel and opening up of the hinterland.

John Mwathi, community leader based from a village near Naivasha town said phase 2A of the SGR project has transformed rural livelihoods through growth of small businesses.

"The value of our ancestral land has gone up since the construction of phase 2A of SGR phase began. Our youth have benefited from jobs and the contractor has assisted us to construct new classrooms and water pans," said Mwathi.