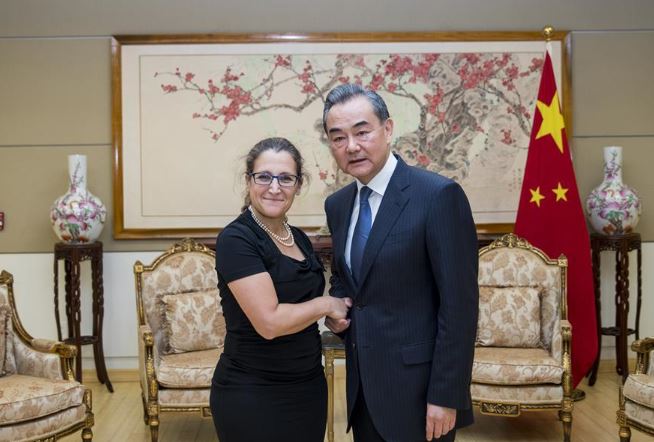 UNITED NATIONS, Sept. 24 (Xinhua) -- Chinese and Canadian foreign ministers on Monday highlighted the importance of defending multilateralism and the rule-based trade order during their meeting.

China is an unwavering supporter of free trade and the rule-based global trade system, he said.

Wang noted that if international rules were undermined, the world would return to the law of the jungle, to the deep detriment of all nations, with middle and small-sized nations bearing the brunt.

China and Canada share similar views on safeguarding multilateralism. "Under current circumstances, we should, together with many countries, issue a joint call for adhering to multilateralism, observing international rules, and safeguarding the multilateral trade system with the World Trade Organization (WTO) at the core," he said.

China supports the reform of the WTO, yet such a reform shall defend the institution's core values and basic principles, and heed the rights and concerns of developing nations, the Chinese senior diplomat noted.

Freeland said that Canada supports multilateralism since it is very important to the country.

The world can not return to the law of the jungle, and Canada is willing to keep close communication with China on the WTO's reform, she added.

The Canadian diplomat also said that her country highly values its ties with China, and is committed to strengthening cooperation with the Asian nation.