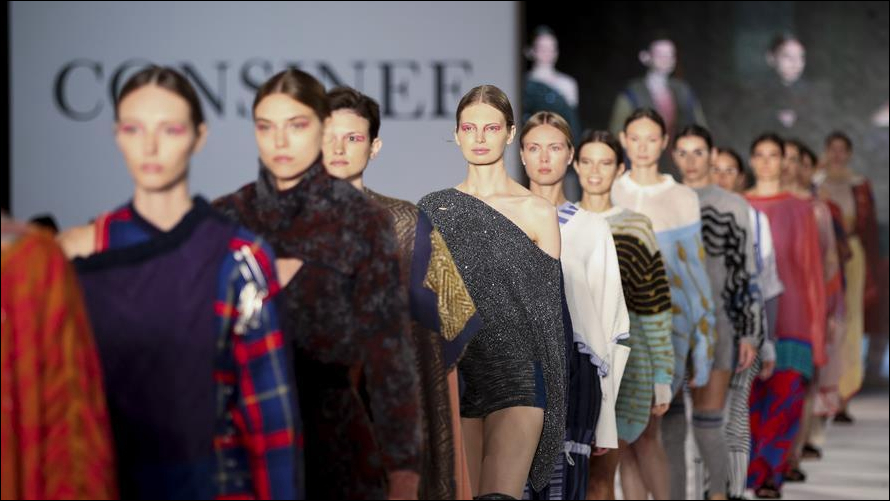 Models present creations made with Consinee yarn during the "Into the Lines" runway show in New York. (Photo：Xinhua）

Consinee, a major Chinese spinner and exporter of cashmere yarn, had its first runway show in New York City on Wednesday, demonstrating the full capability of its yarn technology.

The show, the first of its kind hosted by a Chinese textile company in the United States, is called "Into the Lines," alluding to the conceptual interpretation of cashmere yarn.

It featured 99 pieces of clothing that, together, use more than 100 Consinee products, showcasing the brand's state-of-the-art weaving techniques and high yarn quality.

"Rather than presenting a conventional knitwear collection, the 'Into the Lines' show contemplates and explores the luxury of cashmere and its large potential unlocked by the synthesis of new disciplines," said Chinese-German designer Yujia Zhai-Petrow, the show's director.

Xue Jingli, CEO of the Consinee Group, said he hoped the show can demonstrate Consinee's dedication to excellence and inspire the company's clients by showing new possibilities.

The company generates about 400 million US dollars of revenue every year, 80 to 90 percent of which comes from overseas markets, said Xue.

US businesses account for 35 percent while the European market accounts for about 10 percent of Consinee's total revenue, he added.