Chinese cities in push to reduce smoking amid COVID-19 epidemic 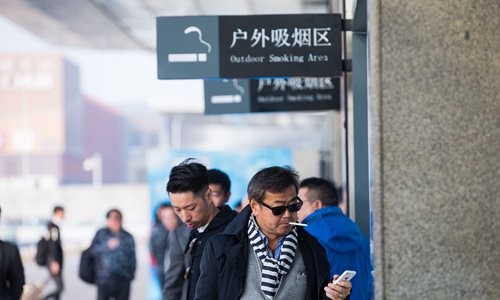 Passengers smoke in a designated area in Hongqiao Railway Station in Shanghai on Wednesday, March 1, the first day the city officially banned smoking in all indoor spaces. (Photo: Global Times)

Top Chinese medical experts, including epidemiologist Li Lanjuan and respiratory and critical care medicine specialist Wang Chen, are warning that smokers are at increased risks of developing severe COVID-19, ahead of World No Tobacco Day on May 31.

In a video, Li warns that smoking harms lungs and increases smoker's risk of developing into severe COVID-19, the disease caused by the coronavirus. Wang noted that lungs damaged by smoking can be severely aggravated by infectious respiratory infections.

Last year, China included tobacco control as one of its special initiatives in the Healthy China Action 2019-2030, and has set a target to reduce the smoking rate to 20 percent by 2030.

Many Chinese cities have spared no effort to reduce the number of residents who smoke in recent years. Beijing's smoking rate dropped to 20.3 percent in 2019 from 23.4 percent in 2014.

The Beijing Tobacco Control Association received a tobacco control award from the WHO in May, the first nongovernmental institution to receive the award in China.

According to Cui Xiaobo, secretary general of the Beijing Tobacco Control Association, the association was awarded the prize for its pioneering use of social media in tobacco control work.

The association developed a "tobacco control map" that allows residents to report illegal smoking in public venues through WeChat. As soon as residents upload photos and videos of such behavior to the platform, community management officials and volunteers can take actions in a timely manner.

"The combination of the mobile phone app and working round the clock with 10,000 volunteers we organized pioneering measure that provides a significant reference to other countries to follow suit," Cui told the Global Times on Friday.

In Shanghai, the number of adults who smoke has declined six years in a row. The smoking rate of smokers over the age of 15 dropped to 19.7 percent in 2019 from 19.9 percent in 2018, the Shanghai Municipal Health Commission announced on Friday.

The city has set up 36 standardized smoking cessation clinics in hospitals to increase smokers' chances of quitting with programs tailored to individual smokers.

"After hospital treatment and follow-up treatments for six months at the clinics or over the telephone and WeChat consultation, smokers can basically get rid of serious withdrawal symptoms. If they can persist they will quit smoking for good," Chen De, director of the Tobacco Control and Behavioral Intervention Department of Shanghai Health Promotion Center told the Global Times.