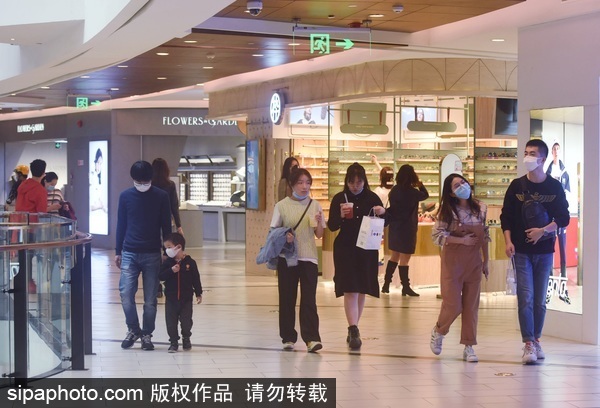 Chinese cities have launched voucher campaigns with multiple enterprises to encourage residents to dine out and shop, in an effort to boost consumption hit hard by the novel coronavirus outbreak.

"It is an enjoyable shopping experience because these vouchers enable me to buy snacks at a lower price," read a consumer's comment on Suning.com, one of China's retail giants.

The online retailer has recently distributed vouchers worth 500 million yuan (about $70.4 million) to its users nationwide to encourage them to purchase goods at its online and offline stores.

The move came after the city of Ningbo in Zhejiang Province launched a sales promotion campaign with a raft of enterprises providing consumers with vouchers and coupons worth around 20 billion yuan.

A total of 12 Ningbo-based cross-border e-commerce companies have participated in the campaign and will conduct sales promotions with major online retailers including Suning.com.

The campaign will guide the city's leading companies and advantaged industries to form an industry alliance to unleash consumption potential with lower pricing, according to Zhang Yan, head of the Ningbo Municipal Bureau of Commerce.

Ningbo is among a series of Chinese cities that have rolled out voucher programs to stimulate consumption.

Nanjing, capital of Jiangsu Province, has announced the issuance of over 300 million yuan of vouchers to its residents and those in difficulties to spur spending and accelerate the resurgence of its service industry.

Also, Jinan, capital of Shandong Province, has handed out vouchers worth 20 million yuan to stimulate spending on tourism and culture, while Jiande city in Zhejiang has pledged to provide tourists with 10 million yuan of travel vouchers.

In early March, Chinese authorities released a guideline aimed at boosting consumption and unleashing the potential of the domestic market to cushion the blow of the ongoing epidemic on economic activities.

The guideline, jointly issued by 23 government departments, detailed 19 measures to remove institutional barriers for consumption growth and revive pent-up demands due to the coronavirus outbreak.

According to the National Bureau of Statistics (NBS), China's retail sales of consumer goods, a major indicator of consumption growth, declined 20.5 percent year on year in the first two months of this year.

The voucher distribution, covering multiple aspects of the economy and society, is expected to precisely boost the consumption demand of targeted consumer groups, particularly those hit severely by the epidemic outbreak, said Pan Helin, an expert in economics at Zhongnan University of Economics and Law.

Consumer demand is rising rapidly as the country accelerates the resumption of work and production nationwide, noted Lin Tao, an official with the NBS, adding that the domestic consumer demand will be further released and the consumer market is expected to maintain steady growth.