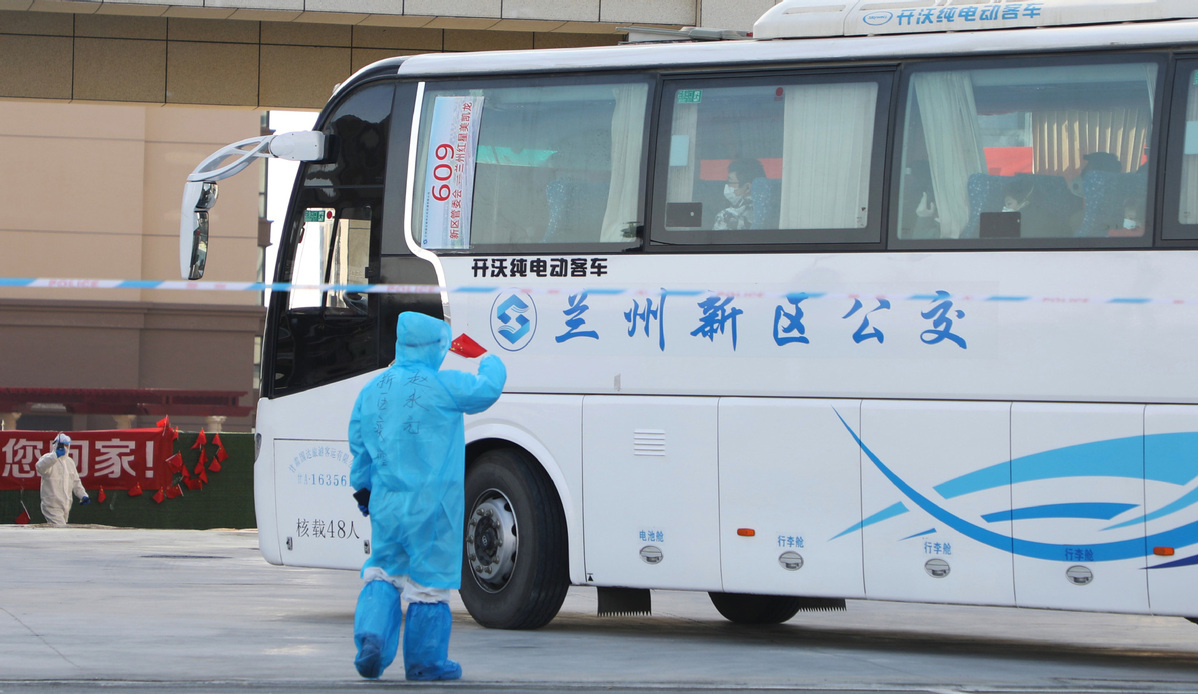 A chartered plane carrying Chinese citizens from Iran landed in Lanzhou, Gansu province, on Wednesday, and all 146 repatriated passengers were placed under quarantine in the city's Lanzhou New Area after their temperatures were checked.

Asked whether China is planning to send more flights to bring citizens back from epidemic-hit countries, Foreign Ministry spokesman Zhao Lijian said on Wednesday the ministry is closely following developments overseas and will take necessary measures to help bring Chinese citizens back if the epidemic develops further and poses a serious threat.

Chinese citizens abroad should turn to local governments for help and contact Chinese embassies and consulates in times of emergency, Zhao said at a daily news conference.

Global Times newspaper in Beijing quoted a Chinese resident of Teheran as saying Chinese citizens in Iran had to register in advance and pay for the air tickets on the commercial chartered flight to Lanzhou.

As the epidemic worsens globally, containing the risk of imported cases has become a major task for China.

As of Tuesday, Chinese customs had found 6,728 inbound passengers who showed symptoms of possible novel coronavirus infection, and 75 were later confirmed to be infected, the General Administration of Customs said on Wednesday.

On Tuesday, customs authorities nationwide found 227 passengers showing symptoms when they entered the country. Five of them tested positive -  four in Shanghai and one in Beijing - the administration said.

In Zhejiang province, two planes landed at Hangzhou Xiaoshan International Airport on Tuesday night with over 30 Chinese passengers from Italy and South Korea on board. They were sent to designated hotels for quarantine.

A female passenger from Qingtian county, Zhejiang, who had a cough, was sent to Xiaoshan People's Hospital together with her father. Her initial nucleic acid test was negative, and she will undergo further tests.

Xu Qingshan, deputy secretary-general of the Hangzhou government, said the city is under pressure from potential imported cases, as more inbound flights are expected from Canada, Thailand, Japan and South Korea.

In Qingtian, which has so far reported eight imported cases from Italy, over 1,500 beds are ready for repatriated Chinese, who will undergo 14-day quarantines.

In Beijing, all travelers coming from countries with active outbreaks, including South Korea, Italy, Iran and Japan, must undergo a 14-day quarantine at home or in designated facilities, Chen Bei, deputy secretary-general of the Beijing municipal government, said on Tuesday. More than 20 Chinese students in Iran have returned via Beijing in recent days, Chen added.

The capital has enhanced coordination among municipal departments, including customs and airports, as well as public security agencies, to register travelers' identities and strengthen health exams at ports of entry.

The Beijing Center for Diseases Prevention and Control has urged all overseas Chinese to avoid traveling, but to conduct any necessary international travel in strict accordance with the relevant recommendations and requirements of local authorities and Chinese embassies.

"If you have been a close contact with COVID-19 patients, you should cancel travel or tourism arrangements and go under isolated medical observation on site," it said in a notice issued on Wednesday.

According to the seventh edition of COVID-19 diagnosis and treatment guidelines, issued on Wednesday by the National Health Commission, cases of infection abroad are "on the upswing", but the domestic epidemic situation in most of China has been relieved.

"Care should be given to guarding against possible transmission and spread of imported cases from outside China," the guidelines said.

Zhang Yangfei and Wang Qingyun contributed to this story.