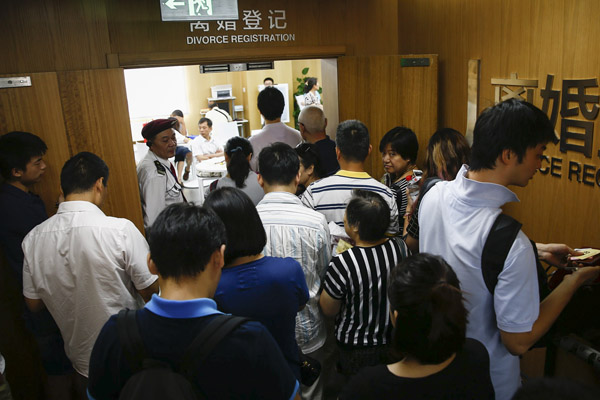 A Chinese city has reached a peak in divorce as a repercussion of COVID-19.

Marriage registration offices in some districts of Xi'an, capital of Northwest China's Shaanxi Province have seen an unprecedented number of divorce appointments since reopen on March 1, media reported on Thursday.

On March 5, the office received 14 divorce appointments, hitting the upper limit set by the office.

Wang said that the divorce appointment also hit the upper limit on March 4.

"As a result of the epidemic, many couples have been bound with each other at home for over a month, which evoked the underlying conflicts, adding that the office had been closed for a month, therefore the office has seen an acutely increasing divorce appointment," said Wang, adding that "Usually the office would see a wave of divorcement after Spring Festival and the college entrance examination."

A similar situation also occurred in another marriage registration office in the city's Yanta district, whose service limit is five appointments for divorcement. An official of the office surnamed Han confirmed the office is also seeing a divorce peak. "There is no vacancy for divorce appointments until March 18," said Han.

Han said that due to long-time staying at home, the underlying conflicts might emerge and result in impulsive divorces. "We received some divorce appointments and they regretted it later," said Han.

Wang said some young couples even decided to remarry when their divorce certificate is printing.

Han suggested couples be serious and prudent toward their marriage and avoid regret based in impulsive decision-making.

"A telephone appointment is required a day before the registration, and their visit time is scheduled down to minute," said Wang, adding that "it usually takes 30 to 40 minutes for a couple to get a marriage or divorce certificate, and the office would be sanitized after receiving another couple," said Wang.

Citizens wouldn't encounter each other or wait in the hall as they normally would, said Wang.