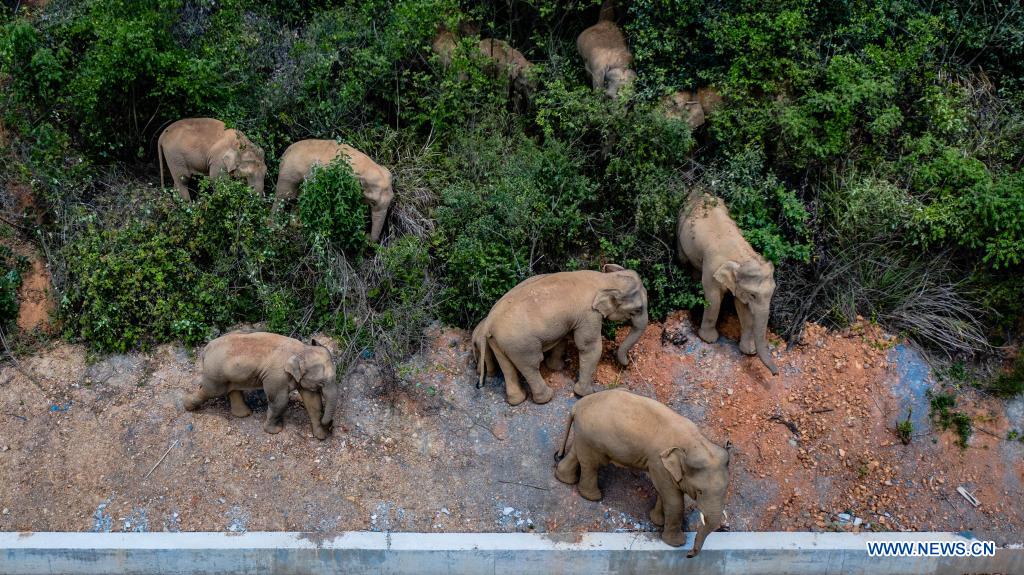 No one knows exactly why the 15 elephants traveled all the way from their forest home in Xishuangbanna Dai Autonomous Prefecture in Yunnan, but authorities have mobilized thousands of people to monitor their migration, suspend traffic on roads they marched on and use food to lure them away from human settlements.

The provincial bureau of forestry and grassland said Tuesday that the herd was in the city of Yuxi, only 20 km from Kunming, a city of 7 million people.

The bureau has reminded the government of Kunming to issue timely warnings and take comprehensive precautions. The city has sent staff to Yuxi to learn monitor and intervention measures.

WHERE ARE THEY GOING?

There were initially 16 elephants in the herd, which left their nature reserve last year to roam in nearby counties under the city of Pu'er. One adult elephant dropped out and two were born in the journey, according to the National Forestry and Grassland Administration.

Officials became alert in April when the 17-member herd arrived in Yuanjiang County under the city of Yuxi. Another two adults left the herd for home while the rest continued to travel north.

On the evening of May 27, they came upon the town of Eshan and walked the streets for six hours after authorities evacuated pedestrians and vehicles and warned residents to stay indoors.

On Monday, the endangered mammals were seen in the Hongta District of Yuxi, where authorities established an on-site command center to monitor their movements 24 hours a day and prevent them from entering densely populated areas by creating barriers and using food as bait.

More than 360 people, 76 police cars and dirt trucks and nine drones were mobilized, and 18 tonnes of elephant food has been prepared, according to the command.

Chen Mingyong, an Asian elephant expert with Yunnan University, said it was the first time that China recorded such a long-distance northward migration of wild elephants.

"Migration of Asian elephants is common, but it usually happens between several habitats in a certain area. It is very rare for them to travel such a distance to the north," Chen said.

"We can't tell what their destination is," he said, suggesting that the migration might not even have a destination. "It is possible that the chief of the herd lacks experience and led the whole group astray."

So far, the giant creatures have wreaked havoc in 412 cases, damaging 56 hectares of farmland in the counties of Yuanjiang and Shiping alone, incurring direct economic losses of about 6.8 million yuan (1.1 million U.S. dollars).

The growing density of forests, another result of the eco-environment recovery, however, reduced the food supply for the elephants and increasingly drove them out of their habitats to search for foods.

Wild elephants mainly feed on understory plants such as wild bananas, which have gradually been replaced by non-edible woody plants amid forest expansion, said Xiang Ruwu, a wildlife official with the bureau.

In recent years, there are growing reports of wild elephants roaming into villages and plundering farm crops.

The province, known as the "kingdom of wildlife," has taken a raft of measures to soothe human-elephant conflict, including setting aside land to grow the elephants' favorite foods, indemnifying villagers against wildlife damages and setting up an alert system.

How to cater to the latest "elephant tour," however, has proved particularly challenging.

"For these 15 elephants, all we can do at present is to issue early warnings and evacuate residents in time to minimize losses," said Chen, adding that as the herd showed signs of moving further northward, there is a need for continuous studying and monitoring.