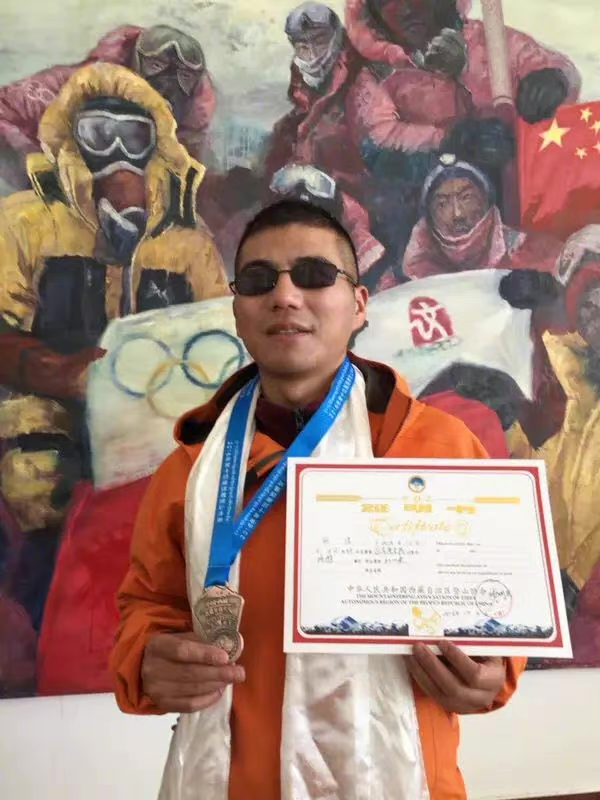 Zhang reached the top of the highest mountain at 9am local time from the Nepali side along with three high-altitude guides, said the Asian Trekking of Nepal that is organizing his expedition.

Jaya Bahadur Tamang, an official from the Asian Trekking, told Xinhua over the phone from the base camp of Mt. Qomolangma that Zhang and his team started to move up to the top of the peak on Sunday night from the South Col (7,900m) and summitted it on Monday morning.

"Zhang is among the few climbers who dared to go to the top of Mt. Qomolangma despite strong winds in the mountain," Tamang said.

There were six Chinese and six Sherpa guides in Zhang's team, but not all reached the top on Monday, according to the Asian Trekking. "As far as I know, Zhang is the only person of the Chinese expedition team to reach the top," said Bhuwan Limbu, another official from the trekking company.

According to expedition companies, there had been strong winds on Mt. Qomolangma from Sunday evening and many had descended from the South Col to the base camp.

Before Zhang's ascent, Erik Weihenmayer, an American mountaineer and Andy Holzer, an Austrian climber, both visually impaired, scaled Mt. Qomolangma in May 2001 and May 2017 respectively.

In April, Dawa Steven Sherpa, chief executive officer of the Asian Trekking, told Xinhua that Zhang had been training hard for the last three years for his goal. He conquered Muztagh Ata, a 7,509-meter-high peak in China's Xinjiang Uygur Autonomous Region two years ago.

In January 2017, the Nepali government decided to ban double amputees, persons without arms and legs and blind persons from attempting the world's highest peak. But, in March the same year, Nepal's Supreme Court ordered not to implement the government's restriction on people with disabilities.

Chinese climber Xia Boyu, who lost both legs to frostbite on Mt. Qomolangma over four decades before, reached the summit of the world's tallest mountain in May 2018.

Nepal issued a record 408 permits for climbers for this spring, aiming for the 8848.86-meter-high Mt. Qomolangma straddling Nepal and China, whose Sherpa guides and other aides do not need such permits.

According to Nepal's Department of Tourism, it has got information about around 350 climbers including Sherpa guides reaching the top of Mt. Qomolangma.