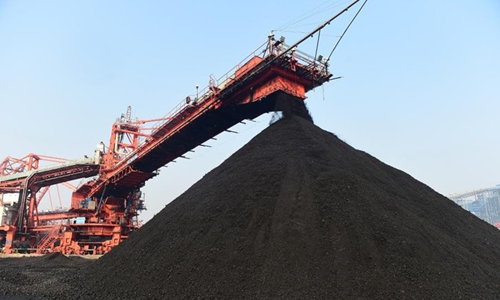 Photo taken on Dec. 22, 2020 shows a thermal coal yard of Huanghua Port in Cangzhou City, north China's Hebei Province. Huanghua Port, one of the key ports for thermal coal transportation in China, has stepped up its turnover rate since this December. A daily average of 500,000 tonnes of thermal coal is loaded to ships at the port now to quench the thirst for coal-fired power generation in southern parts of the country. (Xinhua/Wang Min)

The high demand for energy in China's rapidly growing industrial sector, along with several cold snaps at the end of 2020, have led to high coal prices in China this winter and even power shortages in certain areas.

Due to the intense supply of coal for power plants in December, governments of some provinces in south and east China, including Hunan, Zhejiang and Guangzhou, introduced power limits for local factories to ensure supply for residents, referring to the vow made by China's top economic planner on December 21 at a press conference held by the State Council Information Office that civilian use of electricity must be guaranteed.

But the National Development and Reform Commission (NDRC) also said that China's power supply is overall smooth and orderly.

The joint statement from the seven Chinese leading coal groups was in line with the NDRC's order that they must play important roles in stabilizing the coal market to ensure the stable supply of coal and to meet the high demands during the New Year's Day holiday and upcoming Spring Festival in February.

In the announcement, the groups vowed to take actions in five areas, including maintaining coal supply with the premise of ensuring safety. Coal production firms should arrange working shifts during the holidays and conduct a series of security checks, the announcement said.

Also, the quality of coal products must meet standard requirements and will be prioritized for the power plants in specific areas with coal shortages.

The announcement also suggested accelerating the signing and summarizing of middle- and long- term contracts in 2021 to prevent the rapid rise and fall of coal prices.

The cooperation between coal production and distribution firms needs to be optimized. Supply and demand plans should be updated according to market changes and client numbers.

Finally, the announcement stated that backup plans should be in place in case of emergency situations to ensure the normal operation of each part of the industry and help the development of industry.