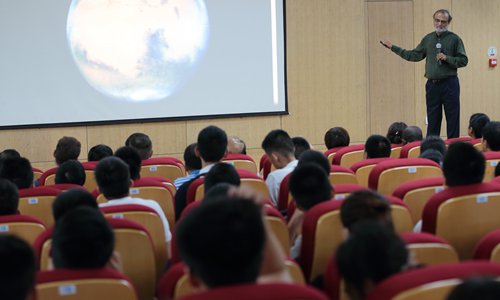 During the visit, Maskin gave a public lecture titled "An Introduction to Mechanism Design," and was appointed an honorary professor of the college in a ceremony.

"Our school is not that famous, so it was surprising that a Nobel laureate would visit," Lin told Phoenix Weekly. Indeed, in many provinces, Lin's college is categorized as a band III university, which are normally private colleges dedicated to training students for employment rather than research.

Lin's college wasn't the only school Maskin visited last December. According to media records, during that trip to China, Maskin was appointed as honorary professor in at least five universities, including Chongqing University, Yunnan Normal University, Yanching Institute of Technology, South China Agricultural University and Wuhan University of Engineering Science, and appointed honorary principal of Canvard College of the Beijing Technology and Business University. In many of these universities, Maskin made the same public lecture on mechanism design.

All the colleges Maskin visited had one thing in common: they are far from top-notch Chinese universities, and are all part of a private-owned Chinese education group called Beifang International Education Group.

After the tour, the education group wrote in a press release, "Maskin helped Beifang International Education Group to go international and improve its quality, and provided support for the development of China's private higher education sector."

"I searched on Weibo and felt like he's here for a commercial tour," Lin wrote on social media site Weibo after finding out Maskin's packed itinerary in China.

But with China's growing need to internationalize its education industry and as its conference industry booms, more and more Nobel laureates are invited to visit the country.

However, few of their visits are truly academic in purpose, and many have a commercial agenda.Academic exchange

A decade ago, if a Nobel prize winner visited China, most of them would go to top universities like Peking and Tsinghua.

Today, however, they can increasingly be seen speaking at second- and third-rate universities, and being granted honorary titles.

However, student feedback shows that many of these visits have little effect on the students.

"He made the same speech in all the universities he visited, and the things he talked about were actually rather shallow," Du Yumeng, a student in Zhejiang Province who attended Maskin's public lecture in her school, told Phoenix Weekly.

Recalling Maskin's trip to her school, she said the event wasn't inspiring and didn't leave much of an impression on her.

In 2017, following the visit of James Watson, an American molecular biologist who won the Nobel Prize in Physiology or Medicine in 1962, to China, Zhang Huabin, director at Beijing Tsinghua Chang Gung Hospital affiliated to Tsinghua University, wrote on his blog, "In recent years, Nobel prize winners, many in their 80s and 90s, frequently visit China for public speeches or partnerships at labs. From what I see, a lot of these visits are only because Chinese people are stupid and have money."

Zhang wrote in the blog that James Watson, although a Nobel prize winner, was notorious in the West for his racist views and was shunned by Western academia for a decade.

"I felt incredible after I saw news that he made a speech in my alma mater, the medical department of Peking University. If Watson spoke in any university in the West, the campus will be full of protesters and the principal of the university would lose his job," he wrote.Conference boom

In addition to giving speeches at universities and colleges, many Nobel laureates come to China to be guest speakers in the growing number of international conferences held here.

For the companies that hold or sponsor these conferences, the presence of a Nobel laureate can greatly improve the level of a conference and provide good publicity for the company. "Inviting a Nobel prize winner is a big selling point for an event. It's a way to attract more clients, and is a big enhancement for the branding of a company," an agent for Nobel prize winners told Phoenix Weekly.

Nobel prize winners have a price tag, according to a price list provided by an agent. The cost to invite a Nobel laureate to attend a forum and give a speech is usually $60,000 to $80,000, sometimes going as high as $130,000 depending on the person.

An insider in the conference industry says that even though Nobel laureates can be pricy to invite, they're sometimes easier to approach than domestic experts, who often have governmental roles. "Some Chinese officials are reluctant to appear in commercial forums. Practically speaking, foreign experts have the same level of influence, and they are easier to invite," the agent told Phoenix Weekly.

As Nobel laureates become more common at Chinese conferences, just inviting one laureate to attend an event can no longer meet the needs  of conference organizers.

In addition to attending conferences, some Nobel laureates established a deeper relationship with the Chinese companies that invited them.

Unlike celebrities, Nobel laureates, as scholars, don't openly advertise for companies. However, some Nobel laureates are doing so in China by being hired as consultants for Chinese companies in promotional events.

Japanese chemist Akira Suzuki and German biochemist Hartmut Michel, both Nobel Prize laureates, for example, were hired as "research consultants" for China Life Science Holding Group, a Hong Kong-based biotechnology company, after they attended a summit held by the company this May. James Watson, when visiting China last March, was also named "head consultant" of the Cheerland Investment Group, a Chinese investment company which sponsored his trip.

Still, some Nobel laureates have been making real contributions to academic research in China. One of them is Bernard Lucas Feringa, a 2016 Nobel Chemistry Prize laureate, who received a Chinese "green card" along with six other foreign citizens from the Shanghai government in May.

Feringa also serves as a visiting professor at East China University of Science and Technology, and started leading a team at the university to develop "self-healing materials" in December 2017.