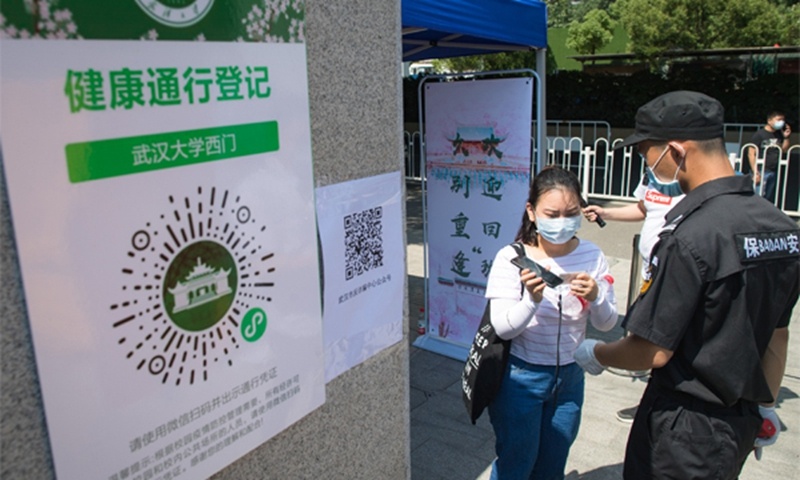 A student scans a QR code to register her health information at the west gate of Wuhan University in Wuhan, Central China’s Hubei province, on June 8, 2020. (Photo: Xinhua)

After months of lockdown, students from Wuhan University finally returned to their familiar classrooms and dormitories to begin the new semester, but some changes are in place as the campus is trying to balance resuming classes and epidemic control. If students at Wuhan University need to leave campus, they need to fill out an application on the school's "Wisdom Luo Jia" app that will be reviewed by teachers as soon as possible. After approval, the system will rapidly send a QR code to the students for leaving and entering the school gates, a teacher from the university told the Global Times.

The measures taken at Wuhan University are not unusual as a massive number of college students flew back to campuses across China in September to resume their disrupted study during the epidemic. Most universities like Wuhan University have adopted closed or semi-closed campus management, requiring teachers and students not to leave the campus unless necessary and not allowing off-campus personnel to enter without an appointment.

While the measures taken aimed to protect students' safety, they drew criticism from some Western media outlets. The New York Times accused China of having "corralled" college students inside campuses, forbidding them to leave school grounds to eat or meet friends.

In response to the smear campaign from the West, teachers and students reached by the Global Time stressed they believed the strict epidemic prevention management implemented by universities is responsible for the sake of the students, teachers and public health. Several students reached by the Global Times said that they actually appreciated the time at the campus with their schoolmates.

While China has made a role model in combating the epidemic, more than 6.5 million in the US have contracted the virus, the highest number in the world, more universities experienced a rise in COVID-19 cases after campuses reopened for fall semester in recent weeks.

"School is not an insufferable shutter island, teachers and students are actively spends this special time together on Chinese campus," a teacher surnamed Huang at Wuhan University told the Global Times.

Wu Zunyou, a chief epidemiologist in China's Center for Disease Control (CDC), recently told media that the "do not leave campus if it is not necessary" provisions are very conducive controlling the epidemic.

Wu noted past outbreaks in Beijing, Dalian and Urumqi saw increased social pressures when the first patient appeared. He stressed that the most prominent feature of universities is the collective life of students, and if there are students infected, it will bring great difficulties to the school and society's epidemic prevention and control efforts.

Huang said Wuhan University does its best to provide attentive services for students. "Although we ban take-out food on campus, Wuhan University has 27 canteens, including some snack stands, and logistics departments to ensure the variety of food is as diverse as possible every day," she said.

At present, there are more than two dozen express delivery points in the campus. Wuhan University actively plans to make sure that students can pick up packages close to their dormitories, and guided them to keep a safe distance when queuing for fetching the parcel, she added.

Aside from Wuhan's universities, campuses in Beijing have also made comprehensive preparations.

"Our school's rules of leaving are constantly being adjusted and optimized," Chen Ming (pseudonym), a teacher at Peking University told the Global Times, saying that before the new term, teachers accompanied every student staying at school when they went out. After the new semester begins, teachers no longer keep an eye on students' outing plans, but offered help and advice to those leaving campus.

Chen noted this year was also the first time Peking University conducted closed military training for freshmen on the Changping campus, wherein students were required to take their temperature three times a day, and classes did not cross each other in training, dining and accommodation.

"Now, students who apply to leave school within three days can leave directly after registering on the internet without teacher's approval," Zhang Yuan (pseudonym), a student counselor at East China University of Science and Technology (ECUST) in Shanghai, told the Global Times.

Zhang often went to the dormitory to chat with her students. She said there are a variety of reasons for student to leave school, including going home to fetch groceries, conducting experiments, or even going for a walk to relieve stress.

"Due to the epidemic, many students have delayed their learning progress, especially students who cannot go back to the laboratory to do experiments. Now the school has opened, they are in the sprint period under great pressure."

"The campus card is an important defense line to ensure the safety of student," Zhang said. In ECUST, students must swipe their campus card to enter or leave the campus. If they do not return to school in time, the system will report their information to the teacher. To Zhang's relief, her students have timed their exits and entries well, and the alarm mechanism has not been triggered.

A little bitterness and great joy

Recently, "the school's fence" has become a key phrase on the internet. Many college students met their parents, hugged their significant others, and even ate a hot pot meal through the fence on periphery of the campus.

Netizens have raved that the epidemic let us understand the meaning of love and the need to cherish each other.

Peng Wenjun, a junior student at Jilin University, actually climbed out of the campus during the 14-day quarantine in August.

"At first, I thought staying in the dormitory very boring, so I had made a detailed plan, found a low fence that couldn't be seen by the surveillance cameras, and finally climbed out while the security guards were resting," Peng said.

But shortly after Peng sneaked out of the campus, he climbed over the wall again to return to school. "I walked around the city alone and found staying at school more interesting; when the epidemic situation stabilizes, there will be more opportunities to go outside with my classmates," Peng said.

Indeed, life "inside the fence" is brilliant, some say.

During the quarantine, lots of students shared their 'isolated' reality on social networks by shooting videos depicting a lively campus. Students danced in the playground, sang in the canteen, and watched movie screenings in empty classrooms, among other activities.

"When we met each other, the scene was like the Spring Festival. The first words must be 'long time no see', and then we had plenty to talk about," Zeng Zihan, a senior student at Wuhan University told the Global Times.

"Everything is convenient. Our school's strict anti-epidemic measures made me more released to have classes, eat meals and play ball games with my classmates. We live snugly and happily together, "he said.

This week, Zeng became a volunteer to welcome new students. Although due to school's restrictions, the number of parents and business stalls at the welcome location has reduced considerably, Zeng saw a smile on every new student's face.