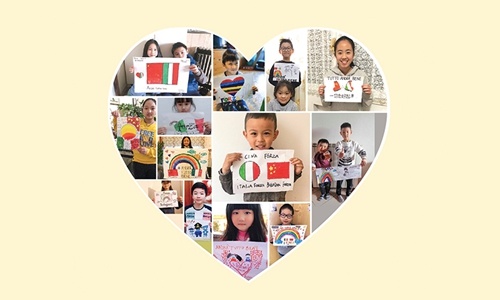 Children from the Chinese community of Bologna in Italy show their paintings which call on people to stay strong in Italian and Chinese. (Photo: Courtesy of Chinese youth volunteers in Bologna)

In recent months, the Chinese community in Europe has emerged as a significant group in public affairs.

When China was fighting the epidemic, the Chinese community collected supplies to support those in need though some faced discrimination and xenophobia.

Italy suffers one of the world's deadliest outbreaks of COVID-19. Restaurants, businesses and schools have been suspended. Although quarantined at home, many Chinese have chosen to lend their hand in the battle against the pandemic.

In Italy, the Lombardy region is the most affected area.

A Chinese resident in Milan, surnamed Zhang, has been working for several local Chinese societies doing relief work. She told the Global Times each of them has served a role during the pandemic to help people both in China and Italy.

"When the outbreak was hitting China, we collected supplies in Italy and transported them to China," Zhang said.

"When it became Italy's turn, we have been delivering supplies to Italy from China," she said.

On March 18, the second Chinese medical expert team from East China's Zhejiang Province arrived in Milan. Northern Italy has a large community from Zhejiang, with many Chinese working in trade or service industry.

Through the coordination of the Chinese Consulate General in Milan, an online hospital has been running. The medical experts sent to Italy diagnose and ship them medicines for free. Zhang said that Italy's prevention work is relatively good compared with many other countries in Europe; she has confidence in Italy's battle against the pandemic.

Chen, a young volunteer, has organized the Chinese community in Bologna to make donations.

Within 48 hours, Chen and fellow volunteers received 21,731 euros from the local Chinese community. Many children donated their lucky money they had received from their families during the Chinese Lunar New Year.

The money went to the Sant'orsola Hospital in Bologna. 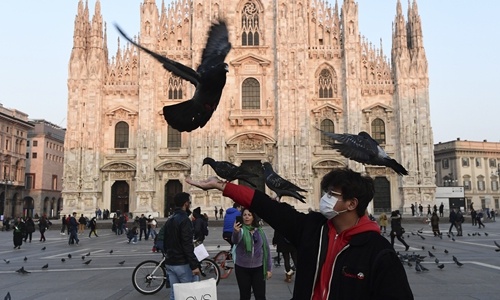 The children created 84 artworks, showing rainbows, medical personnel and phrases, such as "Andrà tutto bene," meaning "everything will be alright" in English. The paintings are expected to be hung in the hospital to comfort patients.

Qiu Nan, who also helped with the donation efforts, told the Global Times that many Chinese people in Italy had shared their spare face masks, which have been in high demand due to shortages. Some, including Qiu, have handed out face masks to strangers on the street.

"Our face masks are purchased and mailed from China," Qiu said, adding that, "Via local Chinese people, the government here also has been seeking to purchase medical supplies from China."

At the beginning of the pandemic, some Italians were rude and referred to Chinese as a "virus," Qiu said.

"The voices were targeting Chinese. Some Chinese people were beaten, and their cars were smashed," Chen said. "But when the situation became more severe, the Chinese community united, and began to make great contributions where we live."

To date, "the Chinese community is the only foreign group here that has provided aid to Italy to confront the pandemic without asking for anything in return," she said.

"I believe after the pandemic, the relationship between China and Italy will be improved greatly," Chen said.

When asked why the Chinese community would provide help, Chen said, "Chinese people are traditionally good willed," and also emphasized they have local business concerns to consider.

As many as 300,000 Chinese people live in Italy, and only few of them were infected. Prato city of Central Italy has the largest Chinese community and it was assumed to have more infected cases than other cities since the local media expected many Chinese people would go back to China during the Spring Festival. However, not a single Chinese has been infected in the city, according to the Chinaqw. com.

Chen Ming, founder of the Italian-Chinese youth association based in Turin, said that at the beginning of the pandemic when Italy had not yet issued any prevention policies, Chinese people started to take protective measures according to Chinas regulations.

Spain is also facing a dire epidemic. Sun Xinbo, a Chinese student studying at the Universidad de Castilla-La Mancha, told the Global Times many in Spain had ignored warnings from the China and believed it was just a common flu. When the situation became worse, medical supplies, such as face masks, were depleted.

Sun, who is also president of a Chinese student association, said many Chinese in Spain offered help to locals and donated face masks to hospitals.

Chinese living near Madrid gathered 3,000 medical face masks and donated them to a local hospital.

Aside from donations, some Chinese made short videos to educate people on fighting the virus and maintaining hygiene.

At first, there was discrimination against the Chinese due to the virus, but many locals are now grateful for the help they have received from the Chinese community, said Sun.

Chinese doctors in the UK issued a bilingual statement in Chinese and English at Addenbrooke's Hospital, calling for donations.

Many Chinese are engaged in coordinating donations from China to the UK, aiming to help with shortages of face masks, protective gear, goggles and gloves, Li, a Chinese-British man in London, told the Global Times.

"We do this out of concern for the pandemic. It's time for all of us to unite," Li said, noting that most people in the UK have always been friendly to the Chinese people, although some have still made racist remarks.

"There will always be some unpleasant voices. What we should do is ignore them and do what we can to help those who need help," Li said.