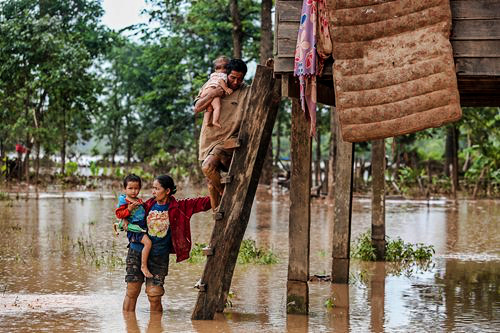 On the way to southern Laos' Attapeu province, which was hit by flash floods triggered by Monday's collapse of a hydroelectric dam, a Xinhua reporter received a call from Hu Yong, secretary of the Party working committee of the China Railway No.5 Engineering Group.

Hu, who is working on the construction of the China-Laos railway in northern Laos, was rushing on Wednesday to deliver relief supplies and equipment collected by his company to the disaster site.

Unfamiliar with local conditions, he was asking Xinhua reporter for the shortest route so as to bring the aid to the disaster-stricken area in the least time possible. "Please feel free to contact me if anybody has trouble sending disaster relief materials to Attapeu. As a Chinese company in Laos, we are willing to help," said Zhang Xinlu, general manager of Laos Global Insurance Company based in southern Laos.

The Lao government has designated the areas affected as a national emergency zone. Amid the deadly disaster, Chinese people in Laos are ready to help. "Taking advantage of our outlets in southern Laos, we have arranged for a truck to transport instant noodles and other disaster relief materials to Attapeu," said Ma Xu, general manager of Lao-China Hongta Good Luck Tobacco Company.

"Our company has started raising money and contacting the local government to help the victims in a timely and effective manner," said Ma.

As the largest Chinese company in Laos, Power Construction Corporation of China, immediately sent staff at project sites closest to the flood-hit zone to deliver relief supplies to the needy.

The company also organized dam and hydrological experts to provide on-site assistance and support to the Lao government.

Top Photo: A Laotian couple carries their children from their home in the flooded area in Sanamxai, Attapeu province, on Thursday. Rescuers battled fresh rains on Thursday to reach scores of people who remain missing following the collapse of a dam in southern Laos that unleashed a torrent of water, washing away whole villages and killing at least 26 people. /AFP