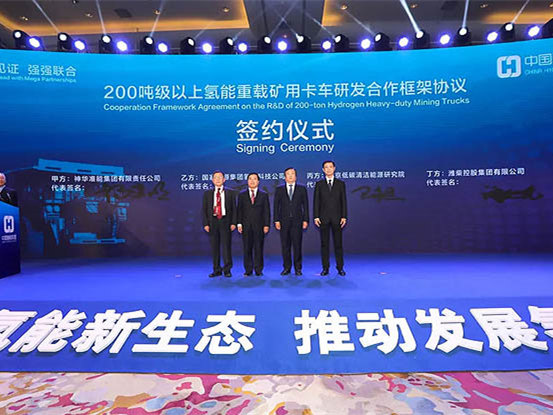 An agreement was inked between two subsidiary companies and a research institute of China Energy Investment Corporation (CHN Energy), the world's largest energy company for installed capacity, and manufacturer Weichai Power Company to produce heavy-duty mining trucks running on hydrogen. Such trucks will have a carrying capacity of more than 200 tonnes.

The companies aim to make breakthroughs in key equipment and engineering technologies through the cooperation, according to a statement.

The move marks a step forward in promoting clean fuel in China's transport sector, which has already witnessed the operation of hydrogen-powered buses in Shanghai as well as Chengdu, capital of southwest China's Sichuan Province.

CHN Energy's general manager Ling Wen said China's hydrogen fuel development has started to pick up pace, adding that more technological innovations will promote the use of hydrogen in a wide range of industries from cars to spaceships.

A report predicts hydrogen will soon become a significant part of China's energy mix, taking up a share of at least 10 percent.