The project of Rehabilitation and Adaptation of Algiers Refinery, awarded to China Petroleum Engineering Construction (CPECC) by Algerian national oil company, Sonatrach, is an especially challenging one rarely seen in the history of global petrochemical construction.

Photo shows the construction site of Algiers refinery project undertaken by CPECC in May 2019. (Photos: Courtesy of CPECC)

Algerian Prime Minister Abdelaziz Djerad once hailed this project as setting an example of cooperation between Algeria and China, noting that it is the participation of Chinese companies like CPECC that has ensured the project’s success. 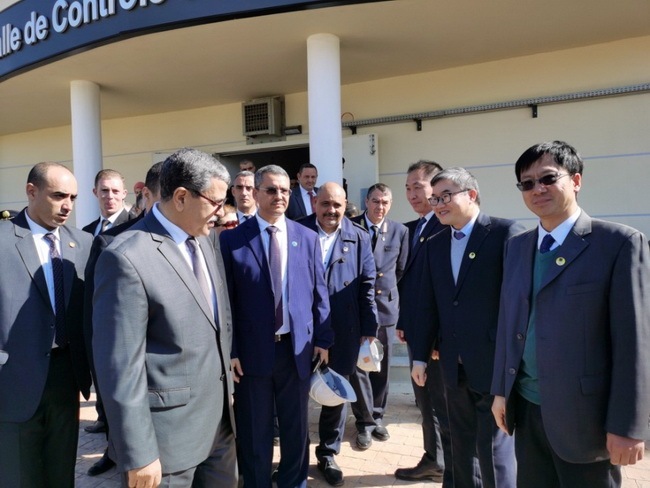 “At first, few of my colleagues understood the reasons for taking on such a difficult project, but time has proved us right,” said Chen Peijian, general manager of the CPECC Algiers refinery project.

In a recent joint interview with the Belt and Road Portal (BRP) and China Petroleum Daily, Chen told the story of his experience managing and constructing the project.

BRP: Could you please tell us the timeline of the project?

In 2010, an internationally renowned French company won the bid to renovate the refinery with the aim of expanding the capacity to 3.6 million tons per year. However, in 2015, when the project was about 70 percent complete, the owner terminated the contract with the French company and re-opened the bid a year later.

On November 6, 2016, the refinery project was awarded to CPECC, and in September 2017, I went to Algeria, serving as the general manager of this project.

In May 2019, the modernization of the existing plant was successfully completed. On June 19, 2020, all units were successfully brought into production, indicating that the refinery was ready for commercial operations.

On September 23, 2020, all devices completed performance tests and were handed over to the owner. Now that it has been operating for more than half a year, the results have been satisfying in terms of product quality, capacity and energy consumption.

BRP: Why is the Algiers refinery important to Algeria?

In the past, Algeria has had shortages of refined oil products. Although the country is an exporter of crude oil, it had to spend a lot of money on importing refined oil. The expansion of the Algiers refinery will help Algeria meet its domestic demand for oil products, save foreign exchange and advance local economic growth.

BRP: What is the significance of the project?

Chen: Since the refinery is crucial to Algeria, the successful completion of this modernization project by a Chinese company is certainly a plus for relations between China and Algeria. It also has the potential to promote more cooperation between the two countries under the Belt and Road Initiative (BRI).

In February 2020, Algerian Prime Minister Abdelaziz Djerad visited the construction site. When he left the control room, he specifically came to me and said that China and Algeria have a historical friendship and have maintained friendly and close relations over the years, noting that the refinery project is a good example of cooperation between the two countries. 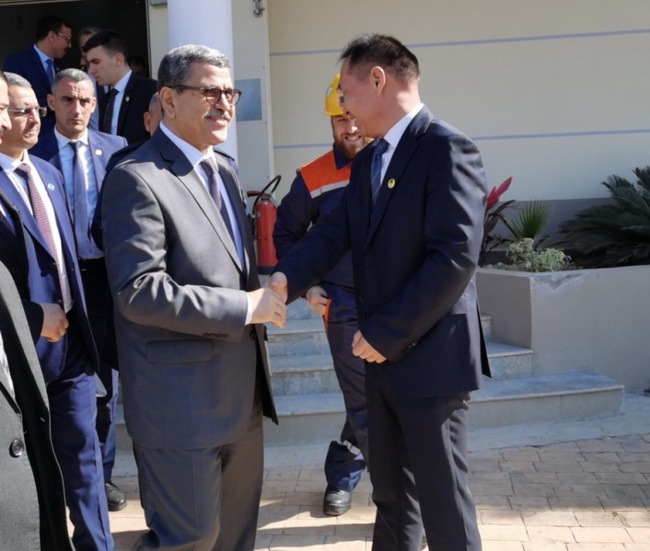 In addition, when we took over the project from the previous general contractor, we had to learn their management and operation system and standards. My team was greatly inspired by this process. We further integrated and summarized a set of general engineering, procurement, construction and commissioning (EPCC) contract management systems, which serves as a good practical precedent for similar projects from the company. 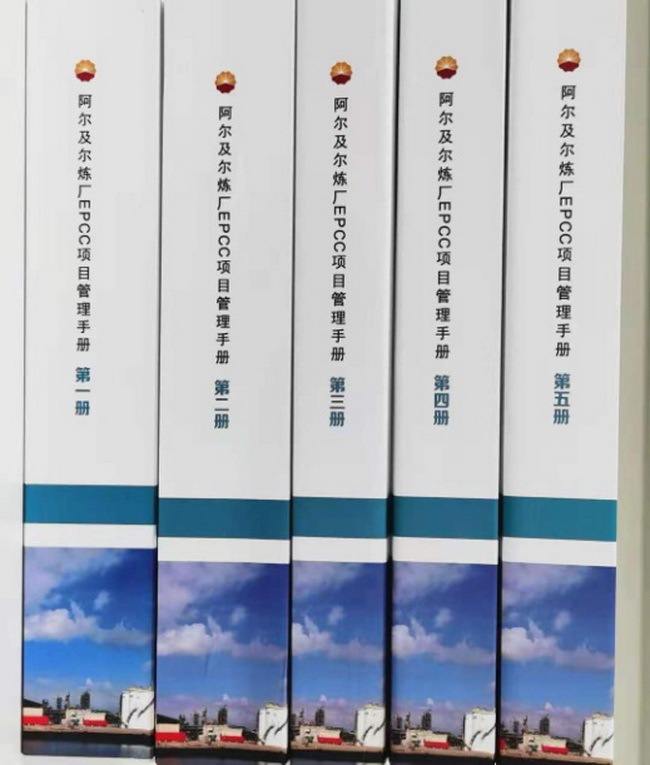 BRP: What were the challenges faced in constructing this project?

Chen: Modernization projects often involve high safety risks, and the Algiers refinery project was no exception. The refinery’s existing plant had been operating for over 50 years and the devices were not well maintained, so oil leaks were a major problem.

We did a little test at the time and found that the earth from the construction site could be easily ignited, which meant a little spark caused while digging could lead to a serious accident. This is why in many places we didn’t dare use machines, instead we had to dig little by little with shovels and by hand like archaeologists.

Workers dig the construction site with shovels like archaeologists in November 2017.

Moreover, the construction period went through two rainy seasons, and frequent rainfall led to a large number of landslides on the site, causing severe challenges to construction.

BRP: In what ways is the Algiers refinery project so special?

Chen: The Algiers refinery project is unique in that CPECC took it over halfway from a former contractor, which has hardly ever happened in the history of petrochemical construction.

If it had been a project carried out from scratch, the entire process including designing, purchasing, constructing and commissioning would be clear and traceable. But a secondhand project is something else. We had to spend a lot of time cleaning up and verifying the progress made by the previous contractor.

For example, the contract indicated that the design was 99.7 percent complete by the time we took over the project, but after careful verification, it turned out that the original contractor had only completed about 75 percent of the design, which meant my team had to finish more than 20 percent of the design.

We also had to check the previous procurement progress. Some materials were stored in the warehouse, while others left at the construction site, or even piled up on the grass. We had to clean it up in order to make our own purchasing list. It turned out that we had to buy many supplementary materials that had either been lost or damaged during the previous construction, and we ended up with an order volume three times larger than that of a similar-size new refinery project.

BRP: What is your team in Algeria like? Could you share with us your experience running a multi-cultural team?

Chen: We had around 80 Chinese staff on the Algiers refinery project, making up about 30 percent of the total. We recruited the remaining 70 percent from local staff upon arrival, who served as engineers, service staff and so on.

While getting along with our overseas employees, my main principle is to treat them equally regardless of their position or nationality. This is a basic gesture of showing respect. I believe cultures of different countries are fundamentally interrelated, and people of all cultures appreciate the feeling of being seen and respected.

We often organize various kinds of group-building activities. For instance, we invited local employees to celebrate traditional Chinese festivals together, and on some local festivals, such as Eid al-Fitr, we also held parties or gave the relevant employees holidays or other kinds of benefits. We also set up fixed spots for local employees to pray.

Chinese and local workers take part in a technical competition together in November 2017.

I think this kind of group-building activity is especially important for cross-cultural teams. It not only shows respect to our local employees, but also passes on the unique charm of Chinese culture, which the local community is usually not familiar with. Many Algerian people were deeply attracted by Chinese culture after close understanding and communication.

BRP: Do you have any advice for Chinese companies constructing infrastructure projects in countries and regions along the BRI routes?

Chen: Zeng Guofan, a famous Chinese politician in the late Qing dynasty (1644-1911), once said that one should "build hard fortifications and fight dull wars". After all these years of experience conducting overseas construction, I’ve developed a deep understanding of this saying.

What does “build hard fortifications” mean in this case? First, you need to carefully and comprehensively analyze the risks in project execution and make relevant solutions; second is to improve the capability of the team by training your people; and the third is to establish a complete and comprehensive management system with clear standards that aligns with the local market.

“Fighting dull wars” means putting your feet on the ground and getting rid of idealistic obsessions with things like shortening the construction period or making yourself look good. You have to do it step by step. Above all else, you need to focus on every little thing, lay out a good foundation and be strict with the execution.

Finally there’s something else called “abide by the law and win by surprise”. As much as you strive to strictly implement local laws and regulations and closely follow the requirements of the contract, you should still grab the opportunities to show your strength when you could.

For example, due to the COVID-19 pandemic, some of our international subcontractors couldn’t show up, so we offered to take on the work ourselves in order to move on with the construction. That is, when something unpredictable happens and the situation requires you to take additional responsibilities within your reach, you need to make the bold move to show your strength and ensure the completion of the project.