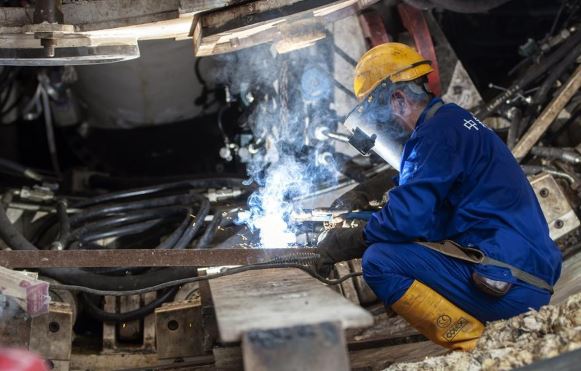 A man works at the construction site of the Tunnel Boring Machine (TBM) in Kuala Lumpur, Malaysia, March 28, 2019. (Photo: Xinhua)

The two Tunnel Boring Machine (TBM) will be operated by the Shanghai Civil Engineering Group of China's CREC for tunnel drilling of more than 1200 m of the MRT 2 project, said Bai Yunbo, the project manager of the company.

The company involved in previous phase of the project and its proven track record helped it to win the new contract, Bai said.

The Malaysian contractor said this is the second cooperation with Chinese companies. The two sides have worked closely in areas including design and construction.

The 150-km MRT is a major project of the Malaysian government, which will significantly increase connectivity between Kuala Lumpur and the adjacent areas. The project is divided into three phases, with the MRT 2 to be operated by 2021.