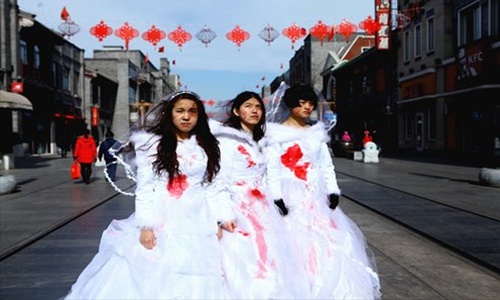 The Chinese Consulate General in Osaka, Japan attaches great importance to a case of serious assault in Japan involving a female Chinese student who suffered prolonged beating and illegal confinement.

Japanese police arrested a male part-time high school teacher in Kyoto on suspicion of using violence against his girlfriend, a 23-year-old Chinese student. The man allegedly restricted her freedom to eat, use toilet and go outside, local media outlet Mainichi Shimbun reported Friday.

The Chinese Consulate General in Osaka was greatly concerned about the case. The consul in charge immediately contacted the Kyoto police to learn about the situation, and asked them to protect the legitimate rights and interests of the Chinese student, wrote the consulate in an announcement published on Saturday.

The Kyoto police said that the Chinese student is currently under protection and in stable physical and mental condition. The suspect has been arrested for assault, and will be dealt with according to law after further investigation.

The Consulate General in Osaka said it will follow the case closely, contact the victim to learn about the situation, and provide necessary consular assistance for her to safeguard her legal rights and interests.