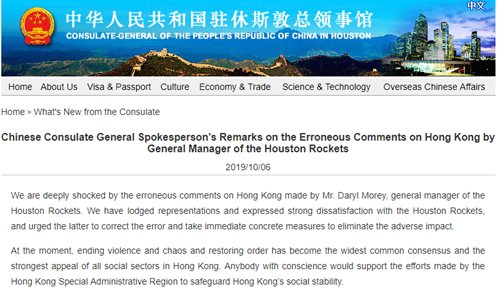 (Photo: Screenshot of the website of the Chinese consulate general in Houston)

The Chinese consulate general in Houston on Sunday urged the Houston Rockets to clarify and correct mistakes after the team's general manager was seen voicing his support for riots in Hong Kong.

The Consulate General expressed strong dissatisfaction with the comments made by the team's general manager Daryl Morey over Hong Kong issues, and has lodged  stern representations with the Houston Rockets and urged the latter to take concrete measures to eliminate the adverse impact, it said on its website.

"Ending violence and chaos and restoring order has become the widest common consensus and the strongest appeal of all social sectors in Hong Kong. Anybody with conscience would support the efforts made by the Hong Kong Special Administrative Region to safeguard Hong Kong's social stability," it said.