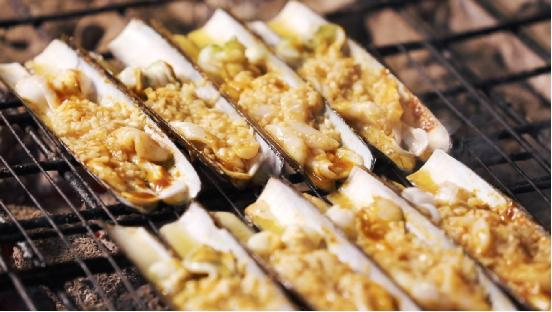 In 2018, the ASEAN bloc became the No.1 exporter of seafood products to China. (Photo: CGTN)

Raise your glass, and drink to your heart's content.

San Miguel Beer, a popular brand in the Philippines, is one of the foreign beer giants that intended to take this opportunity to enter the Chinese market.

Jake Ramintas, the vice consul at the Philippine Consulate General in Guangzhou, told CGTN that they want to share his country's party and happy culture with the Chinese customers through their beer.

During hot and humid summer nights, a cold refreshing glass of beer pairs well with seafood.

"Love for seafood is pretty much in the genes of our Guangdong people," said 36-year-old Li Jie who runs a seafood barbecue restaurant in the southern city of Shenzhen.

However, what makes his restaurant special is that most of the seafood varieties on display are imported from across Asia, such as the mantis shrimp from Thailand, Indonesia and the Philippines, and the arctic shellfish from South Korea.

"They're bigger than the domestic ones, and our customers love them very much," Li said.

Chinese consumers' preference for imported seafood grew to a peak in 2018 when China imported $11.9 billion worth of seafood, a 43-percent increase year-on-year, according to China's General Administration of Customs. Last year, the ASEAN bloc surpassed Russia to become the number one exporter of seafood products to China.

Li also likes to find inspiration for new cooking styles and methods when traveling to other Asian countries.

"For instance, I came up with the idea of having shrimp with passion fruit juice when I was in Thailand. Also, I introduced roasted durian from Malaysia," Li added.

Li said that delicious food is the gift of life and he feels happiness can only grow with more kinds of Asian seafood being introduced to China.