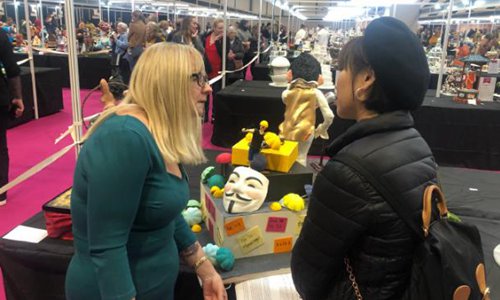 Widespread discussion swept the Chinese internet Sunday after a British cake competition received an entry that showed its support for the Hong Kong riots.

Chinese mainland contestants on Friday at the Cake International 2019, a famous UK baking competition, noticed one entry with controversial symbols in support of Hong Kong secessionists, which they reported to the organizers, according to huanqiu.com on Saturday.

Photos taken by the Chinese participants and uploaded on Weibo reveal a cake covered with a Guy Fawkes mask and other anti-HK government and police symbols.

Videos on Weibo show the mainland contestants speaking with organizers and have been trending hot topics since Friday.

"No matter what the result is, we will keep consulting with the organizer," said one Chinese mainland contestant on Weibo, noting the motherland is above everything.

Netizens applauded the brave behavior and said any action supporting HK secession is illegal and unacceptable.

"You have the support from all Chinese people," said one netizen, praising the Chinese mainland bakers.

"The so-called freedom that the radical protesters in Hong Kong asked for is threatening and attacking people or institutions who hold different opinions," said another netizen said on Weibo.

Many warned mainland contestants to be careful given the violent nature of the HK protests.

On Sunday, one contestant, who asked to remain anonymous, told the Global Times the cake was removed from an earlier exhibition. The contestant was unaware if the entry had been officially withdrawn from competition.