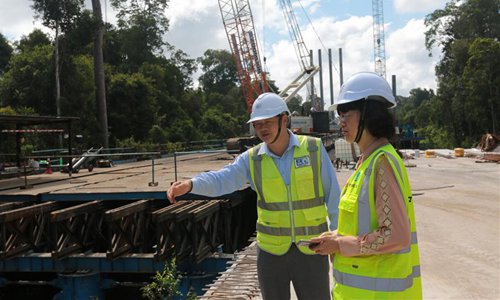 The Chinese contractor of the Temburong Bridge said on Friday that they have made efforts to preserve Brunei's natural landscape during construction.Chen Hongke, project manager of the China State Construction Engineering Corporation (CSCEC) company overseeing the construction of the Temburong viaduct for section CC4, told Xinhua that the CSCEC portion of the bridge spanned 11.8 km across Brunei's uninhabited forests and swamps."Our construction workers had sightings of snakes, wild boars and crocodiles," Chen said. "But the CSCEC is doing everything in our power to preserve the environment."According to Chen, their workforce comprised people from eight countries.Newly-appointed Chinese Ambassador Yu Hong paid an inspection at the CSCEC's CC4 site of the Temburong Bridge on Friday.She urged CSCEC to continue upholding their high standards, expressing confidence in their abilities to ensure that Brunei's natural environment remains intact and cared for.The ambassador also lauded the efforts of the workers who braved the hot and humid weather of Brunei during the festive Chinese New Year.The 30-km bridge, which is expected to be completed in November, will connect the districts of Brunei-Muara and Temburong.The bridge aims to reduce travelling time between the two districts from two hours to just 30 minutes by bypassing Malaysia's Limbang.It will become the longest bridge in Southeast Asia followed by Malaysia's 24-km Second Penang Bridge.