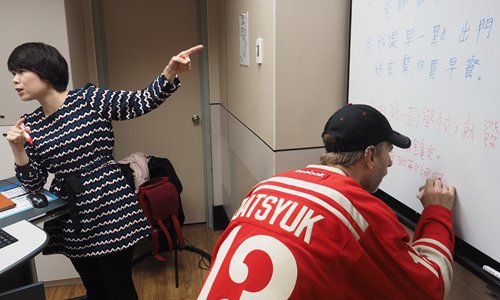 Teacher Cheng Ya-wen (L) points out a mistake in the Chinese written by a student, while another student (R) writes on the whiteboard at the Mandarin Learning Center of the Chinese Culture University in Taipei, Taiwan, on February 7. Photo: IC

When London primary school Kensington Wade enrolled its inaugural class of 15 students in September, it offered something British students had never seen before: total immersive learning in the Chinese language.
It was the first of its kind in the country and Europe, where a growing number of people are starting to learn Chinese, a trend that was not so prominent just a few years ago.
Knowledge of Chinese is seen as a skill that boosts personal competitiveness in finding jobs overseas, just as Chinese people sought to work in foreign companies in the 1970s in order to earn higher salaries, Xie Zuoxu, a professor of education at Xiamen University, told the Global Times.
More countries are beginning to realize how important the Chinese language is on the global stage, and many are actively introducing Chinese courses in their home countries to meet the demand in the market, Xie said.
Parents are willing to fork out 17,490 pounds per year ($22,946) on their children's primary courses at Kensington Wade, which, according to the Financial Times, was funded by a group of socially minded private investors.
"The Chinese government has contributed nothing more than a few textbooks," the report said.
Need to learn
On the UK government website, an article states that Chinese is now "the most widely spoken language in the world, and is seen as important for young people in the UK to master in order for the country to remain globally competitive in the future."
The US saw the number of young Americans studying Chinese double from 2009 to 2015, according to a national survey by American Councils for International Education.
"I think it means Americans are very interested in China. They see knowing Mandarin Chinese (Putonghua) as important for their future," Dan Davidson, the president of the council, told the Xinhua News Agency.
Chinese is the fourth most widely taught foreign language in the US's educational system, and more than 227,000 American students have enrolled in the Putonghua courses, according to the Xinhua report, quoting the survey in June.
A newly released 2016 Census Bureau data by the Center for Immigration Studies shows that about 65 million Americans speak languages beyond English at home, with 3.4 million of them speaking Chinese, Xinhua reported.
In France, that number has quadrupled in the past decade. Beyond that, South Africa, Mauritius, Tanzania, Cameroon, and Zambia all included Chinese in their national education system in 2016, People's Daily reported on October 2.
Spending four years in Africa and having a solid understanding of the African job market, Xie told the Global Times that job seekers who are Chinese bilinguals in Nigeria, for example, can get three times the salary of other people in similar job positions.
Recognition of power
With 10 million pounds in funding, the Mandarin excellence program launched by the British government last year expects to see at least 5,000 young people on track to fluency in Putonghua by 2020.
Chinese fever is sweeping the world, which is a reflection of the fact that the world recognizes China's development and expects to connect with China in the future, Xie said.
"People no longer see a red China with their tainted glasses."
A teacher who taught Putonghua in a Confucius Institute branch in England for two years told the Global Times that most of her students, who range from primary school to university students, hope that knowing Chinese will boost their job prospects since China now has a stronger influence both economically and culturally.
A growing number of British companies have some sort of cooperation with China and the future market has to connect with the country, she said on condition of anonymity.
More importantly, British people are fascinated by Chinese culture, as they are eager to seek something fresh and different from their own culture, either historically or in terms of their way of thinking, the teacher said.
People who believe that it is enough to have a grasp of English, a language spoken worldwide, will eventually lag behind the connected world, Xu Liping, a research fellow on Southeast Asian affairs at the Chinese Academy of Social Sciences, told the Global Times.
By communicating with Chinese people in their native language, which is spoken by more than 1.37 billion people, a different world will be revealed to them and make them more creative, Xu said.
Putonghua might be seen as a rival of English, but in a more connected and multi-cultural world, the two languages will complement, and not replace each other, Xu added.