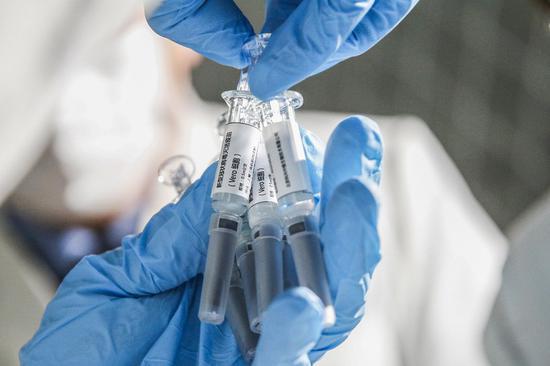 Turkish Health Minister Fahrettin Koca on Thursday said the first shipment of a Chinese COVID-19 vaccine will arrive Monday and it is 91.25 percent effective in trials in Turkey.

"We are sure that the vaccine is effective and safe for Turkish people," the minister said at a press conference.

The phase-3 studies of Chinese vaccine producer Sinovac's inactive virus vaccine CoronaVac were launched in Turkey on Sept. 14. No major symptoms were detected during CoronaVac's trials in Turkey, he said.

The first shipment of 3 million doses of the Chinese vaccine will arrive in Turkey on Monday after the Turkish government signed an agreement for the procurement of up to 50 million doses, which will eventually arrive in the country by the end of February, the minister said.

Turkey prefers Sinovoc's vaccine because it's an inactive vaccine, the minister emphasized.

"The most ancient vaccine method known is the inactive vaccine method. It is the method that we are sure of the benefit we have experienced before," Koca said.

The Turkish government is also in talks with Pfizer-BionTech for its COVID-19 vaccine, the minister said.

The primary group to be vaccinated will be the health staff and the vaccinations could be applied to some 1.5 million or even 2 million people daily, Koca said, noting that he will be among the pioneers of the Chinese vaccine.

The minister also said Turkish experts did not find a mutation in Turkey similar to that in Britain.

Turkey reported its first COVID-19 case on March 11. The country will be under lockdown for four days as of Dec. 31.