"I hope the Peljesac Bridge will be an excellent high-quality project that can withstand all rains and winds," said Li after pressing the button. 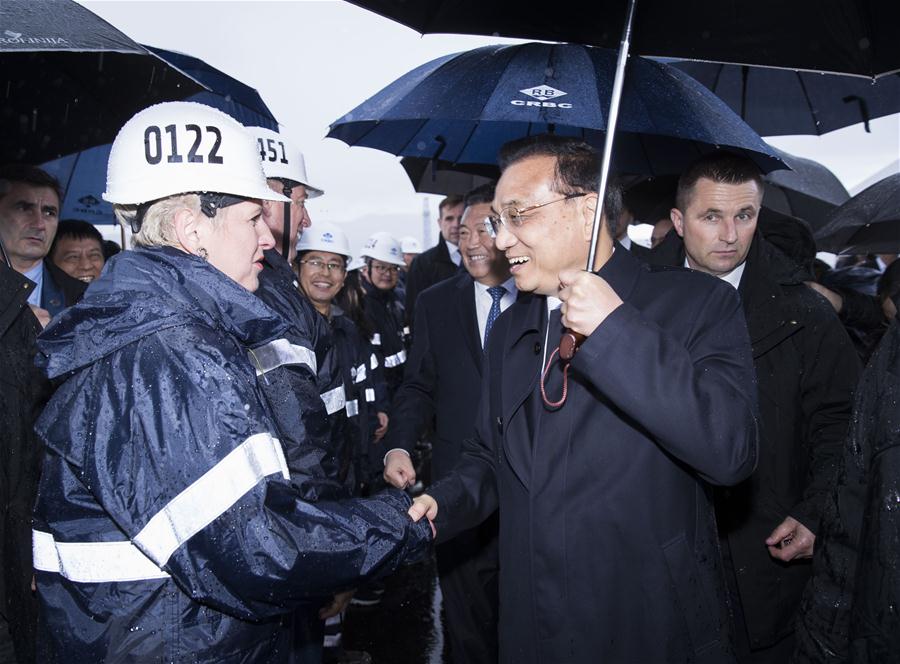 Chinese Premier Li Keqiang (R, front) talks with technicians at the construction site of Peljesac Bridge being built by a Chinese consortium, during a visit with his Croatian counterpart Andrej Plenkovic on the Peljesac Peninsula in southern Croatia, April 11, 2019. (Photos: Xinhua)

Li made the remarks while visiting the construction site of the bridge on the Peljesac Peninsula in southern Croatia with Plenkovic Thursday morning.

The Peljesac Bridge, 2.4-km long and 55-meter high, is designed to link the mainland of Croatia with its southernmost Dubrovnik-Neretva County, crossing the Mali Ston Bay over the Adriatic Sea and bypassing foreign territory.

In January 2018, a Chinese consortium led by China Road and Bridge Corporation (CRBC) won the bid for the first phase of the Peljesac Bridge and its access roads.

It is the biggest transportation infrastructural project between the two countries since they forged diplomatic ties 27 years ago. Once completed, the bridge can potentially cut a three-hour journey to just two to three minutes.

He called the bridge "a bridge of friendship" as it embodies the friendship of Chinese and Croatian peoples and is conducive to regional peace, stability and prosperity.

The bridge is also "a bridge of welfare" as it will help facilitate logistics, personnel exchanges and life of local residents so as to improve the country's social and economic development, the premier said.

The bridge is "a model of tripartite cooperation among China, Croatia and the EU," Li said, adding that Chinese enterprises will build the bridge with the best equipment and technology and build a high-quality project.

He also asked the Chinese consortium to make all efforts to ensure the completion of the project as scheduled so as to benefit the Croatian people at an early date.

The total value of the project is about 420 million euros ($472 million), of which 85 percent will be covered by the EU funds.

Hailing the bridge "a symbol of friendship and cooperation between Croatia and China," Plenkovic said it was Chinese friends that helped the Croatian people to turn their long-desired dream into reality.

Plenkovic said that the bidding process was open, fair and transparent and the Chinese consortium won the bid with the most reliable capability.

When completed, the bridge will not only greatly facilitate the travel of the Croatian people and improve local development, but also provide market opportunities for Chinese companies and set a good example for China-EU practical cooperation, said Plenkovic.

Li arrived in Dubrovnik Wednesday from Zagreb to continue his official visit to Croatia. He will attend the eighth leaders' meeting of China and Central and Eastern European Countries (CEEC) in the coastal city on Friday.