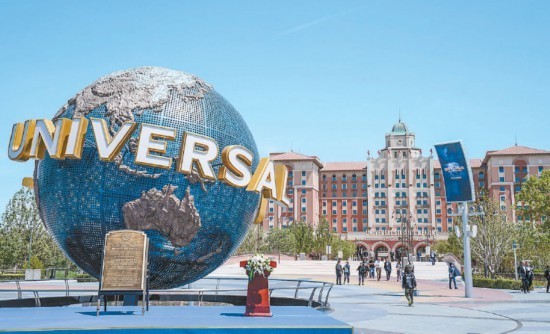 Chinese culture will make its presence felt most in the Kung Fu Panda Land of Awesomeness, the first of its kind the resort has presented to the world.

Inspired by the animated action comedy film "Kung Fu Panda", this indoor theme land focuses on the design of Chinese-style scenic spots, including the panda village, which will allow visitors to experience distinct Chinese culture.

In the Transformers: Metrobase theme land, Beijing becomes the headquarters where Autobots and humans stand together to protect Earth. The redesign of the location is aimed at making the scenic spot more accessible to local visitors.

In the Hollywood theme land, Chinese film director Zhang Yimou and Hollywood film director Steven Spielberg will partner to create a behind-the-scenes movie-making experience for the resort, representing a blend of Chinese and Western cultures.

Miao noted that the resort fully takes into account the consumption needs and cultural background of Chinese consumers and strives to make Chinese cultural elements the "finishing touch" of the theme park.

In addition to the theme park, other attractions within the resort also have an abundance of Chinese elements. For instance, Chinese cultural elements such as ancient poems will be found in the design of a waterfront path, according to a staff member from the resort.

Meanwhile, the NUO Resort Hotel with its distinctive Chinese style is designed to offer a luxurious escape inspired by the beauty of Chinese classical gardens.