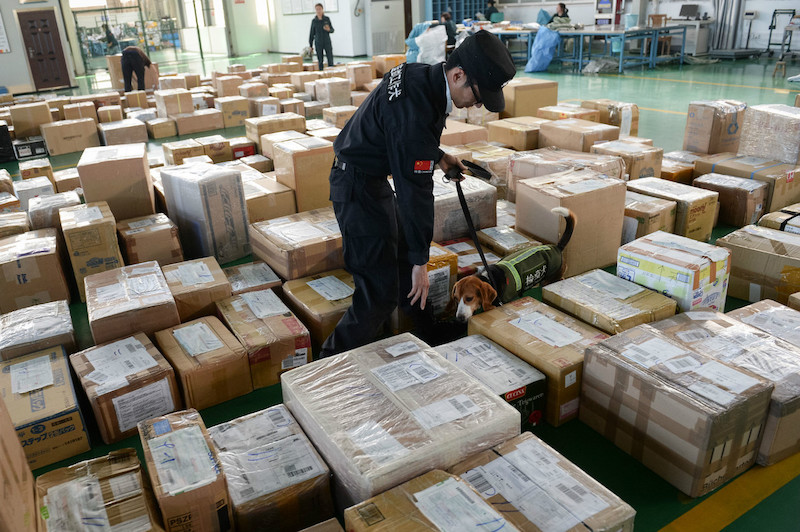 A customs officer uses a dog to check for illegal substances at an e-commerce industrial park in Hefei, Anhui province, that mainly deals with cross-border businesses. (File photo: Xinhua)

Some 400 suspected drug smugglers were taken into custody in 2018 after 70 drug smuggling groups were busted. Drugs involved include heroin, cocaine, methamphetamine and cannabis, the General Administration of Customs revealed on Tuesday.

Customs also revealed that in the first five months of 2019, 284 drug smuggling cases involving 567.35 kilograms of drugs, including cannabis, heroin, codeine and methamphetamine, were busted.

The announcement came one day before the International Day against Drug Abuse and Illicit Trafficking, which falls on Wednesday.

Customs said the number of cases involving drugs and drug material smuggling has been declining for three years due to China's strict crackdown.

But it also pointed out that China continues to face a severe and complicated situation where drug smugglers from foreign countries are still attempting to get drugs into China through multiple points, but Chinese customs authorities are determined to keep drugs away from the country with enhanced efforts and international cooperation, the agency said.

Chinese customs have set up a defense line to prevent drug smuggling at border ports, such as those near the Golden Triangle in Southeast Asia, the agency said.

It listed 10 cases it dealt with in 2018, and four of them happened in Southwest China's Yunnan Province, which borders the Golden Triangle and is a major front in China's battle against drug crimes.

The gang disguised drugs, including heroin and crystal meth, as "tea bricks" and smuggled them from Myanmar to Hubei via China's border province Yunnan.

Police from Yunnan, Hubei and Hunan provinces have been working together since last year to track down the gang, while Myanmar police arrested the ring leader nicknamed "Lao Guang" and deported him to China, the public security bureau of Wuhan said.

Last week, Beijing police also announced that, in October 2018, they had busted a trafficking gang with the help of South American police which transported cocaine from South America through international postal packages.