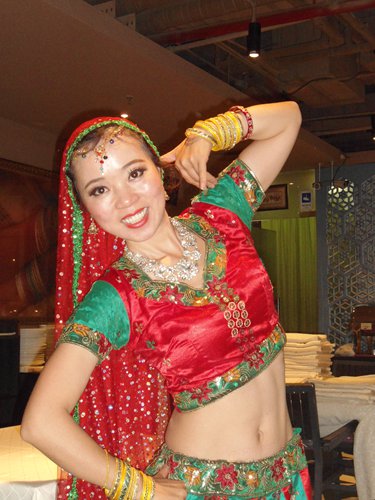 She slithers onto the podium to the beat of a Hindi number, her lithe frame twirling into a classic Bollywood pose. Amid the whirl and swirl of an ethnic Indian costume and throbbing music, the dancer's gyrations reach a rapid beat. So does the mood in the restaurant.Some diners start tapping their feet under the square tables while others turn to look intently.Zhao Le has been doing this for more than a decade. Six years ago, it was on a dais in an Indian restaurant in Beijing's CBD. Today, she has leaped onto a podium at another of the restaurant's branches in Wudaokou on the other side of the capital.At 28, the chirpy Le has mesmerized audiences with a variety of tastes and heritage. While Indian diners find in her an epitome of their culture thousands of kilometers from home, the Chinese marvel at one of their own serenading an exotic artistic tradition, an example of two civilizations coalescing into a symphony.Lily's (Zhao's alias) journey into "dancedom" began when she decided to make the art her vocation and joined the Beijing workshop run by Kuchipudi (a dance from the southern Indian state of Karnataka) exponent Hari Om, who coached her for two months.Laxman Hemnani, owner of the restaurant chain in Beijing, said a number of Chinese dance enthusiasts have learned classical dance forms from a teacher at the Indian embassy's culture center. He would train them in Bharat Natyam (from Tamil Nadu in South India) and other classical dance forms for free. Le knew some students who had learned it from Hari Om, and was in turn trained by them.Movie maniaMany Chinese audiences love Bollywood music from Indian director Raj Kapoor's movies, Awara being one. They are also fond of tracks from Jeetendra's (Indian film star of yesteryear) film Caravan.So is Le, who is eager to visit India, the birthplace of the art she practices.Owner of Wu Yuan Dance, a workshop for children, Lily slips into the role of a teacher when she is not making Indian dance palatable to patrons at the restaurant. Bollywood films have also impressed the woman who, in her Indian costume, looks like a native from the northeast of India.Dangal, 3 Idiots and Baahubali have been Lily's favorites Indian movies. Struggling to explain her admiration for the Indian films, Lily says: "I love Hindi movies," adding in halting English that she has been watching them for many years.Expatriate diners relish Lily's way of flitting between Hindi film numbers with practiced ease, often joining her to shake a leg. Her photographs with patrons have been shared on WeChat and other social media platforms, says Hemnani.Lily's entire dance wardrobe is sourced from India. "A Chinese designer based in New Delhi sends me all my costumes," she says with a twinkle in her eyes before breaking into an impromptu jig.Cultural pushIndians living in China, particularly Beijing, say the Indian embassy has been enthusiastic in promoting India's dances. Hundreds of Chinese citizens have benefited from the free dance training offered by the cultural center affiliated to the Indian mission."After getting trained at the center, these girls in turn train other Chinese in the craft. There is a huge demand for learning Indian dance forms here, especially among 3 to 4-year-old girls," says Hemnani.Modern cultural ties between India and China can be seen as a continuation of cultural exchanges that go back hundreds and even thousands of years.The town of Rajgriha (modern Rajgir) in the Indian state of Bihar was visited by Chinese traveler-monks who have recorded details of the physical setting of the place. Fa Xian, Xuan Zang and Yi Jing are among a number of scholars who visited India to study Buddhism and learn about Indian traditions and culture.Xuan Zang, who visited India from 630 to 642, specialized in the Yogacara School of Buddhism. He is said to have returned to China carrying back images of Buddha and texts and notes.The Indian dances that people usually see in China grew out of "Natya Shastra," a Sanskrit treatise written by the sage Bharata in historical times. These graceful forms have crossed borders and have lent a perspective to Indian culture abroad.This is probably what drew Lily to Hari Om's workshop, after which she was able to slip into the role of an entertainer with practiced ease. She not only performs at the restaurant but also displays her art before larger audiences who are generally part of corporate groups touring China. She and another dancer have regaled visiting Indian groups and other customers at gatherings on different occasions.You could say Lily is the cultural ambassador of India in China, despite being a Chinese.