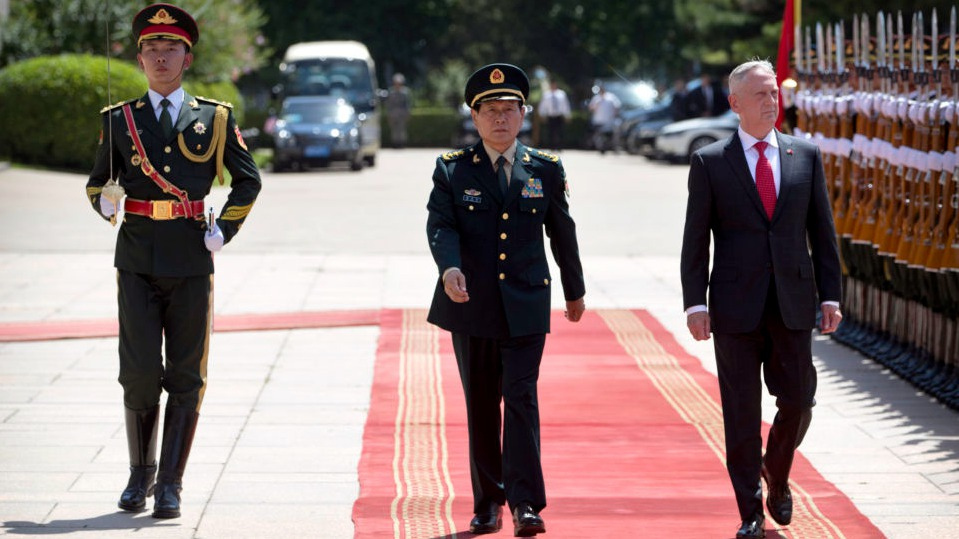 Chinese State Councilor and Minister of National Defense Wei Fenghe has accepted an invitation from US Defense Secretary James Mattis to visit the US this year, ministry spokesman Wu Qian said on Thursday.

The exchange of visits between the defense ministries of the two countries comes from the consensus reached between Chinese President Xi Jinping and US President Donald Trump concerning the development of China-US military ties, Wu said at a news briefing.

The spokesperson added that the two sides have maintained close contact regarding the visit.

Mattis visited China from Tuesday to Thursday and met senior Chinese officials including President Xi and Wei in Beijing on Wednesday.

Wu said the visit has yielded fruitful and constructive results.

The two sides exchanged views on the relationship between the two militaries, the Taiwan issue, maritime safety, and the Korean Peninsula situation. They reached important consensus on enhancing mutual military trust, deepening practical cooperation and managing challenges together, Wu elaborated.

China and the 10 other members of the Association of Southeast Asian Nations (ASEAN) have scheduled a joint maritime exercise for later this year, Wu announced.

The purpose of the joint drill is to enhance mutual trust, expand exchanges and cooperation, and safeguard regional peace and stability, said Wu.

The parties are currently working together to arrange the details, he said.

The center is the first that China's military has built in Africa. The construction of the center will be finished soon and the handover ceremony will be held in early July, said Wu.

China will conduct medical cooperation with Sierra Leone based from the center, Wu said.

China will continue to help African countries enhance their disease prevention and control systems and capabilities, and will provide them with more public health security resources, Wu added.

Wu also confirmed that lieutenant general Liu Xiaowu, deputy commander of the Western Theater Command, will head a border defense delegation to Pakistan and India in the near future.

Liu will meet and hold talks with the two countries' military leaders on topics including theater-level exchange, border management and control, as well as cooperation in border defense.